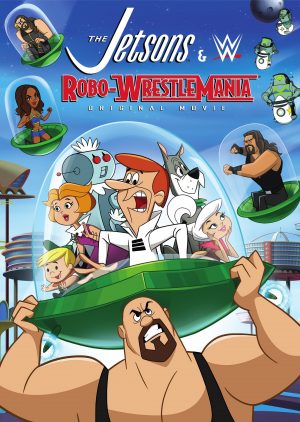 Everywhere you turn, there are odd mashups occurring throughout comics, especially at Warner Bros. and DC Comics where the wall separating properties has crumbled. The latest example is the confounding The Jetsons & WWE: Robo-WrestleMania direct-to-video film. Apparently they must have had a success with The Flintstones & WWE: Robo-WrestleMania because here’s a sequel.

Thankfully, WWE World Heavyweight Champion Big Show has been frozen in ice, like a certain star-spangled Avenger, and when George Jetson thaws him out, the wrestler wants title back. He does this by vanquishing that era’s wrestle-bots and once he takes the throne, decides he wants to take over the universe. Coming to the future’s rescue as Roman Reigns, Seth Rollins, Alicia Fox, the Uso Brothers, Sheamus and WWE impresario Vince McMahon.

George, his boy Elroy, daughter Judy, and Jane, his wife, have to save Orbit City when it’s invaded by a wrestle-bot army en route to the conquering all of space. Good thing Elroy has a handy time machine so Big Show’s greatest opponents are brought forward in time to save the world, the universe, and beyond.

For kids who thrive on mayhem and plot-light entertainment, there’s plenty of antics. For their parents and grandparents, there is a certain comfort in seeing the tried and true tics of the original animated Jetsons one more time: from George’s ineptness to Mr. Spacely’s temper. However, at nearly 80 minutes, this can quickly grow tedious because there is just not enough content for the vast majority of the viewers, especially those unfamiliar with the current generation of WWE superstars.

As a crossover, this is weak stuff, more along the lines of when the Harlem Globetrotters got (briefly) stranded on Gilligan’s Island rather than smarter fare such as Batman ’66 Meets the Man from U.N.C.L.E.

There are times its feels director Anthony Bell is going through the motions and the animation quality is so-so at best. Jeff Bergman’s George Jetson and Mr. Spacely works because he’s had 20 years to get them right. Grey Griffin’s Jane is acceptable but Danica McKellar’s Judy is spot on (goodbye Tiffany) and topping her work is Trevor Devall’s Elroy. And it’s always good to hear Frank Welker’s Astro. The WWE stars play themselves so they sound right and look silly and seriously out of place – although the script doesn’t play enough with that.