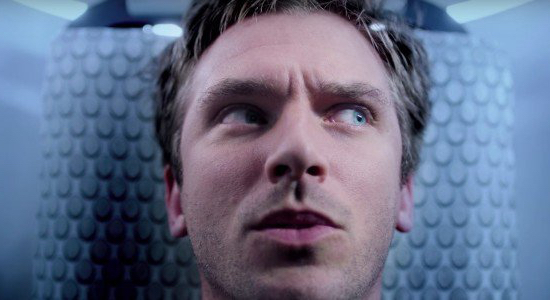 • Talking Heads, Once In a Lifetime

Okay, I’ve finally found a TV superhero show I like more than The Flash, which is saying a lot. It’s Legion, Wednesdays at 10 PM (ET) on FX, and it stars Dan Stevens in a role that’s world’s away from his stint on Downton Abbey. He plays David Haller, a man who may be the world’s strongest telepath and, because of his schizophrenia – their diagnosis, not mine – perhaps the most dangerous.

The show is from 20th Century Fox in association with Marvel TV and is the first to link with the X-Men movie franchise which, for contractual and bureaucratic reasons, is separate from the Mighty Marvel Movie Franchise over at Disney. It’s not only unlike any other superhero TV show out there. In fact, it’s different from any other TV show, period.

What makes Legion so different is the use of the concept of the Unreliable Narrator. That concept means the reader/viewer cannot trust the facts of the story as presented. The device is most commonly used in fiction with a first person narrator, but it can be used in film and television and it’s being used very effectively here in two ways.

The show’s creator and showrunner, Noah Hawley (who also wrote and directed the first episode), wants the show to be told from Haller’s perspective. The story is about him, but since he can’t trust his own memories neither can we. His perception of reality around him may be off as well. David is an unreliable narrator.

At the same time, Hawley skews the design elements so that they match Haller’s mindset and are disorientating to us. His way of presenting David’s life cannot be wholly trusted either. Hawley is also an unreliable narrator.

There’s a key moment in the first episode when David’s being held at Clockworks Psychiatric Hospital (which itself seems to be a nod to A Clockwork Orange) where he is drugged, tested, questioned, evaluated. There’s a strong suggestion of a sinister governmental organization – as if there is any other kind – called Division 3 who seem ready to kill Haller.

David is eventually rescued by his sort of girlfriend named Sid and people connected with a place called Summerland run by Dr. Melanie Bird. There’s running and people shooting at them but, in the middle of the escape, David stops and begs of Sid, “Is all this really happening? Are you real?” She reassures them that it is happening, she is real, and they must run.

Those questions, for me, are the center of the episode and maybe of the series. Is this real? Is this happening? Can David trust it? Can we?

In the second episode, David – now safely (?) at Summerland, is being helped by Dr. Bird and her associates. Dr. Bird insists that David is not crazy; the voices he hears are part of his telepathic powers manifesting and always have been. One of her associates helps guides David through buried or forgotten memories but, again, we’re not certain how reliable those memories are and neither is he.

As I’ve been thinking about the show, I’m now questioning even what I think I know. What if Summerland is not the beneficial place we’ve been told it is? What if kindly Dr. Bird is not all that kindly and the evil Division 3 folks are really the good guys? What if David Haller himself is not a “hero” but more of an anti-hero or even an outright villain? He’s is the Legion of the title and I’m put in mind of the gospels of Mark and Luke where Jesus meets a man possessed of demons who says “My name is Legion for we are many.” David has a lot of voices inside him.

The character of Legion was created by Chris Claremont and Bill Sienkiewicz in Marvel’s The New Mutants #25 where he was the son of Charles Xavier, Professor X of the X-Men. The TV show doesn’t precisely follow the comics’ continuity but I think it’s very true to the concept, re-interpreting it for this day and age. I’m fine with that.

The show demands attention and some thought. I hope that it has some answers for the questions it poses, unlike such shows as Twin Peaks and The X-Files). Right now, I’ve settled in for the ride.