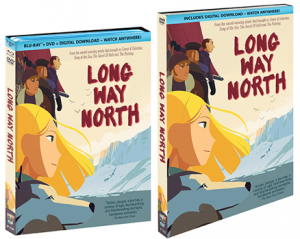 Get ready to embark on an awe-inspiring journey to the North Pole in the visually exquisite animated feature, LONG WAY NORTH. Directed by celebrated filmmaker and animator Rémi Chayé (The Secret of Kells) and produced by Sacrebleu Productions (Oscar®-nominated Madagascar, Carnet de Voyage), Maybe Movies (Oscar®-nominated Ernest & Celestine) and Norlum Studios (Oscar®-nominated Song of the Sea), LONG WAY NORTH won the coveted Audience Award at the Annecy International Animation Film Festival and the winner of Grand Prize at Tokyo Animation Festival, and is an Annie Award nominee for Best Animated Feature-Independent. This captivating animated feature, bolstered by emotionally resonant storytelling, has continued to attract universal acclaim as it enchants movie audiences and families around the world. On January 17, 2017, Shout! Factory Kids is proud to present LONG WAY NORTH on DVD, two-disc Blu-ray™+ DVD Combo Pack (with digital copy), Digital HD and iTunes.

A spirited and inspiring tale of hope and courage, LONG WAY NORTH tells the story of a young heroine persevering through a physical and emotional journey to find her explorer grandfather and his lost ship, the Davai. This award-winning animated movie offers an immersive cinematic adventure that brims with heart, action, powerful storytelling and gorgeous animation in equal measure.

LONG WAY NORTH is set in the late 19th century Saint Petersburg. Sacha, a young girl from the Russian aristocracy, dreams of the Great North and anguishes over the fate of her grandfather, Oloukine, a renowned scientist and Arctic explorer who has yet to return from his latest expedition to conquer the North Pole.

Sacha has always been fascinated by the adventurous life of her grandfather and has the same calling as Oloukine to be an explorer. But Sacha’s parents, who already made arrangements for her marriage, strongly disapprove of the idea to say the least. Defying her destiny, Sacha flees her home and launches an adventure-filled quest toward the Great North in search of Oloukine and his ship.