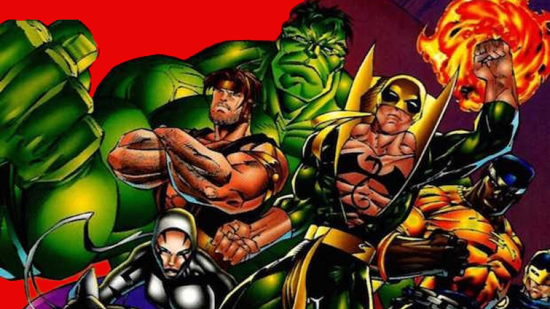 Boy, do I have Christmas gift ideas for you! Volume 5 of the Suicide Squad reprints, Apokolips Now, goes on sale December 27 (okay, it just misses Christmas). The extended blu-ray for the movie goes on sale December 13. And Marvel is releasing the first of two volumes gathering my Heroes For Hire work on December 20. You’re right, we want all your monies.

Today I want to talk about H4H. It was a team book whose members included Iron Fist, Luke Cage, White Tiger, Black Knight, Ant-Man, Jim Hammond (a.k.a. the Original Human Torch) plus assorted guest stars rotating in and out such as Hulk, She-Hulk, Hercules and, eventually, Deadpool – who shows up in Volume 2 out in late January. 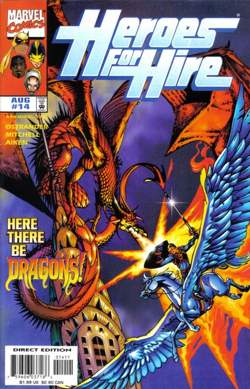 It’s not hard to understand why Marvel is re-issuing the stories in a TPB. Luke Cage is on Netflix and Iron Fist soon will be, they’ll both then appear in The Defenders, and there’s some serious buzz about a Heroes For Hire series as well. There’s a little luster on my name as well right now because of the hoopla about Suicide Squad.

The series was originally set in the Onslaught Era where some of Marvel’s heroes, specifically The Avengers and the Fantastic Four, were thought to have died in battle with a being called Onslaught. In reality, they wound up in a pocket universe from which they would eventually return. Their absence left a power vacuum in the Marvel Universe where other teams, such as Heroes For Hire, were formed to fill the void.

The book was originally going to be written by Roger Stern, a fine writer and Marvel mainstay, but after putting the team together and plotting the first issue, Roger felt that his workload was overcommitted; something had to give and, at that point, H4H was easiest to jettison. However, Roger recommended me to his editor, Mark Bernardo, as his replacement. Mark and I had worked together on other Marvel projects such as Blaze of Glory and an incarnation of The Punisher so Mark was more than willing for me to take over H4H.

I had previously done Suicide Squad over at DC so I was interested in seeing what I could do with a team book at Marvel. I had long been a Marvel fan; at one point, I was an even greater Marvel fan than a DC one and was reading almost everything Marvel put out in those days.

I’m really glad to see H4H reprinted; it became a very different series for me. I plotted it more loosely in a very freewheeling style. Sometimes a story wouldn’t end in one issue but overlap into the next and then plunge right into the next plot.

One of the stranger conceits that I developed was the narrator, the person who speaks in the caption boxes. He got very strange. As early as the third issue, he was addressing the reader directly. It started as him being a Stan Lee type, calling the readers “effendi” and promising to get them caught up as he went.  I especially remembered Stan doing that in Spider-Man and it always stuck with me.

This narrator got out of control, however, throwing in pop quizzes and sometimes panicking at what was happening to the characters. He eventually was “fired” by She-Hulk. How’s that for odd?

I always like playing with continuity when I can and there was one element in Luke Cage that I had fun with. Cage is very street tough but, when he swore, he’d say, “Sweet Christmas!” Understandable at the time given language restrictions in comics when Cage was created as a Marvel blackploitation character.

Lot of people thought “Sweet Christmas!” was ridiculous but I gave Cage a reason for using it. When he’s mocked by an opponent during a fight about it, Cage informs him that his grandma objected to swearing and that “my grandma is tougher than you!”

There are some quiet moments as well that I loved. Namor comes over to the building housing H4H and visits Jim Hammond. In their younger days they had been occasional foes and then allies during WW2,along with Captain America in The Invaders. The scene is just the two of them talking as old friends and Hammond gets out a joke that makes Namor laugh hard. “Firebug,” he tells him, “you kill me.” It’s just one page but I really love it.

My penciller on the series was Pascual Ferry, a Spanish artist, and his stuff was and is amazing. The storytelling is wonderful, there’s a Jack Kirby like sense of energy in his work, he has lots of enthusiasm and energy as well as talent and skill and I simply loved working with him. He’s very professional and a great guy to boot.

The tone of what I did in H4H is very different, I think, than anything else I’ve done. There’s just a lot of fun in it; I was consciously trying for a very Marvel feel and I think this, along with my Marvel westerns, are some of the best work I’ve done for the House of Ideas.

As I said, the second and concluding volume of H4H will be published at the end of January and I’ll come back and talk some more about that when we get there. I got to work with one of my favorite artistic partners before the series ended. In the meantime, if you’re a fan of my work I can recommend this to you. Not everyone has seen it and I think it’s worth seeing.

As Stan the Man used to say, Face front, true believers. Because that’s where the future is coming from.