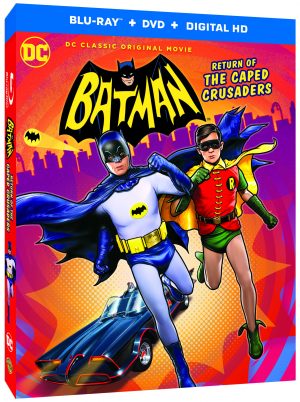 When Batman debuted on ABC in 1966, I was not yet eight years old, a prime target for this pop-art event. I was already a diehard comic book fan and couldn’t contain my excitement at seeing the heroes and villains come off the four-color pages and onto our then-new color TV. I was very excited and had no clue just how campy it was. That came later as the reruns began on WPIX and throughout the 1970s.

The Batman phenomenon has proven incredibly influential on several generations of comic book fans, professional writers, artists, and animators, and beyond. Thankfully, whatever legal entanglements there were between Greenway Productions, 20th Century Fox, and Warner Bros got ironed out, allowing a new generation of fans to glory in what is now known as Batman ’66. The latest offering is the direct-to-DVD animated feature Batman: Return of the Caped Crusaders, starring the voices of Adam West, Burt Ward, and Julie Newmar – sadly the last living main actors from the series.

Directed by Rick Morales and written by Michael Jelenic and James Tucker, there is tremendous love and affection showered on the production, billed as a direct continuation of the ABC series. In that regard, it comes close but not quite. After all, there’s no Batgirl and Robin is played as a still-16 year old with a learner’s permit, when by show’s end he’s acknowledged as older.  Additionally, there have been tweaks here and there so the Batcave is larger and more ornate, complete with the giant dinosaur and playing card trophies while exiting the cave is a more elaborate event. Even the Bat-chutes are reimagined as a singular giant parachute in black (and no evidence the Bat-chute Clean-up Van is still on duty).

The story teams up the fearsome foursome of Catwoman, Joker Jeff Bergman, nicely channeling Cesar Romero), Riddler Wally Wingert, also good), and Penguin (William Salyers) in an appropriately convoluted plot to takeover a space station abandoned after America and Moldavia cannot agree on its use. Batman is subjected to a chemical agent that twists him beyond recognition and he uses a far-fetched duplication ray to essentially stage a Bat-coup over Gotham City. 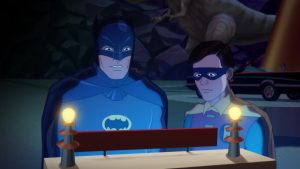 As one expects from a film-length version of the show, all the tropes are there from giant prop death traps, Aunt Harriet’s near-discovery of their secret, the bond between Bruce Wayne and Alfred, the ineptitude of the GCPD, well-choreographed fight scenes, and deathless dialogue on public safety. And I grinned my way through most of it. Clearly, the script played up Catwoman since Newmar could run with the part and her fickle feline feelings has her switch sides with ease. There’s also a nice gag as a stunned Batman sees three Catwoman, one looking like Newmar, one like Lee Merriweather, and one like Eartha Kitt. There are several other sly touches like this one along with jabs at other filmed versions of the Caped Crusader.

Is it perfect? Of course not nor was the original TV series. I think the character designs for Robin and Riddler don’t quite work and the thugs come and go without explanation and when they’re present, there seems to be one of each and they do nothing to aid their bosses.  Speaking of the villains, when they teamed up on TV or first gathered for the live-action Batman film, they at least talked to one another before dissention rose among them. It would have been nice to see more of that here. 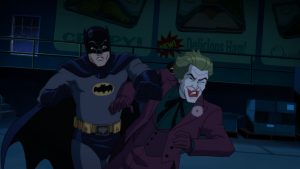 This is certainly the most optimistic and enjoyable Batman film out in 2016 and that’s something to be thankful for.

The film arrives in a Blu-ray, DVD< and Digital HD combo pack. Beyond the film, there are just two bonus features: “Those Dastardly Desperados” tries to shine a light on the importance of the villains but lacks context (or TV clips); and,  “A Classic Cadre of Voices” as vocal cast and production crew talk about the importance of recreating the sounds of the sixties.