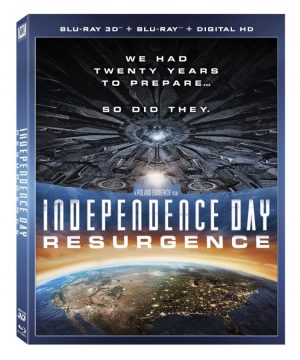 It’s fairly amazing that it took five men — Nicolas Wright, James A. Woods, Dean Devlin, Roland Emmerich, James Vanderbilt – to conceive the story and pen the script to Independence Day: Resurgence when it trod no new ground and felt like the worst rehash of the original film and many other SF flicks from the preceding twenty years.

The original ID4 was an unassuming popcorn thriller with implausible science and predictable actions but leavened with strong performances and quirky, fun characters. They were having fun fighting the alien invaders and we had memorable lines and Will Smith punching out an alien with “Welcome to Earth”.

Somehow, these five, including Devlin and Emmerich who gave us the first, left out the fun. Instead, for two hours we see a mix of familiar and unfamiliar figures watch an even larger alien ship arrive, intent on destroying Earth either as an act of revenge or still in need of our resources, the locust that would ravage Earth before moving on to the next world. And of course it all happens conveniently on the 290th anniversary, as if the aliens would calculate time so precisely.

The kids have grown up and we focus on Dylan Dubrow-Hiller (Jessie Usher), the son of Jasmine Dubrow-Hiller (Viveca A. Fox) and stepson of Steven Hiller (Smith) and Patricia Whitmore (Maika Monroe), daughter of President Thomas J. Whitmore (Bill Pullman). New kids on the block include Rain Lao (Angelbaby) and Jake Morrison (Liam Hemsworth), not that they get much to do. They are our first line of defense and somehow mankind has reverse engineered the alien tech so they could rapidly rebuild Earth and then build a massive station on the moon (the technological advanced are perhaps the most implausible aspects of this film).

We still have David Levinson (Jeff Goldblum) as the smartest man in the room along with Dr. Brakish Okun (Brent Spiner), the craziest man in the room. And there are numerous newcomers, none of whom are given anything resembling a personality or real role in the film spoiling the talents of Sela Ward as the current President and Charlotte Gainsbourg as a fellow scientist. 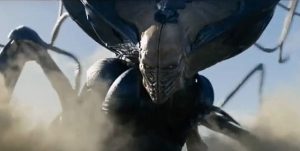 Apparently, a third race has arrived to warn us of the impending invasion but we fired first and it takes time to uncover the Poké Ball, with its dire warnings. The mother of a ship arrives, all 3000 miles of it, and the heroes make a valiant attempt during the trench run to launch the missile into the exhaust port. When that fails, they fall back and fret a lot until smarter minds come up with a plan while the aliens bore into Earth’s crust trying to suck out the molten core. None of the physics of such a massive presence on Earth’s Atlantic Ocean or the drilling deep into the tectonic plates is ever felt.

We win, of course, and the alien queen is stopped seconds shy of victory, all too predictable, all too anticipated and therefore all too futile to entertain. After twenty years, one had every right to higher expectations.

The film is out now from 20th Century Fox Home Entertainment in a 3D Blu-ray, Blu-ray, Digital HD combo pack. The MVC encoded 1080p transfer in 2.39:1 and an adequate transfer, if a bit murky here and there. The 3D version feels entirely like a wasted effort, average at best. The film gets more bang out of the DTS-HD Master Audio 7.1 mix, not that it makes up for a sorry excuse for a sequel.

The 3D disc does not contain any special feature, all saved for the standard Blu-ray. There you get a handful of Deleted Scenes (8:24) with optional commentary by Roland Emmerich; The War of 1996 (5:11) a faux news recap of events between films; It’s Early ABQ (3:07), another faux program with Fred Armisen as an early morning talk show host; Another Day: The Making of Independence Day: Resurgence (55:25), a four part look at the film’s production with cast and crew interviews;  Gag Reel (6:14); Audio Commentary by Roland Emmerich; Concept Art: Aliens (5:48), AI (:43), Humans (2:58), Locations (1:33), and Original Presentational Images (1:28); and Theatrical Trailers (5:18).