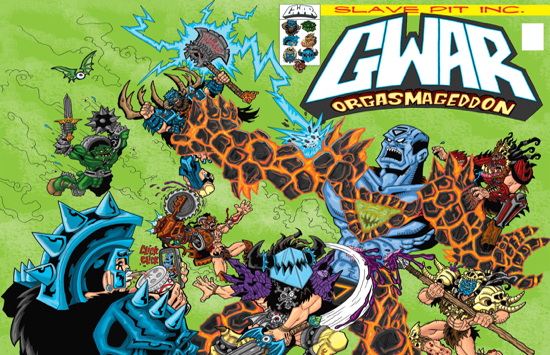 Crowd funding has been a great starting ground for many comics projects. One of the latest to hit Kickstarter is GWAR: Orgasmaggedon. Yes, that GWAR. The heavy metal icons are teaming up with comics professionals to bring us their signature mayhem off the stage and into your comics. Here’s an excerpt from their press release:

“Having already violated the art, music, and film worlds, now infamous scumdogs GWAR are coming for your comic books! Do you need to be a GWAR fan to love this series? Hell no! There’s loads of laughs, violence, fun, and irreverent social satire for everyone to enjoy!”

I got the chance to chat with writer Matt Miner and editor Brendan Wright about this exciting new project. 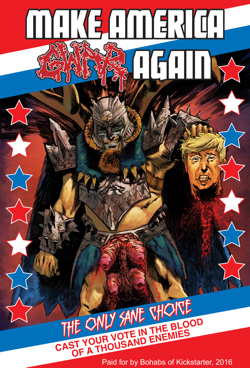 JC: For over 30 years (on Earth, at least) GWAR has brought us unapologetic metal music that’s rich with story and satire. Your latest story is coming to us in comic book form. Could you tell me about the early days of this project and which came first – wanting to a do a comic and crafting a story around that or having a story and wanting to craft a comic around that?

MATT MINER: Joe, I’ve wanted to make GWAR comics since before I started making comics at all. When I got into writing comics this, what we’re doing with GWAR: Orgasmageddon, was one of my major goals – to get the band onboard and write GWAR stories. Most folks who get into comics want to write Spider-Man or Batman, but I wanted to write GWAR. Really, really, bad. So I had ideas for stories, but once I started collaborating with the band, and Matt Maguire specifically, my ideas were fleshed out, expanded on, and made better.

JC: I understand you don’t need to be a big GWAR fan to pick up this book and enjoy it. How did you balance making an accessible comic while also making it a special experience for long time fans?

MATT MINER: I try and keep in mind “Will my wife understand this comic? Will she enjoy it?” Until a few months ago she thought GWAR was pronounced like G-WAR (“Gee War”), so to say she’s not a big fan already would be an understatement. Me, I’ve been into GWAR for more than half my life – her, not so much. So if I write it to be fun for her but still put loads of nods in there for longtime fans like me, I think we’ve got a hit.

BRENDAN WRIGHT: I’m new to GWAR – though now that I’ve been checking them out, the lore fits right in with my tastes and things I’ve edited like Grindhouse and Archie Vs. Predator – so part of my job is to be the relatively fresh set of eyes that can raise a flag when it feels like I’m missing something. What I’ve brought to GWAR from editing a lot of comics licensed from things I wasn’t previously familiar with is the idea that you include just enough explanation in the comic so that everything is clear, but don’t sweat it too much if a couple details go unexplained. As long as they don’t get in the way of the story, those details actually draw readers into the world, making them curious enough to want to dig into the source material rather than feeling like they have to. It’s not that different from when we all discovered superhero comics, which have tons of previous stories that simply can’t be referenced all the time. But ideally most of that goes by unnoticed for first-timers, who just get an over-the-top, funny story, while giving dedicated fans something extra. 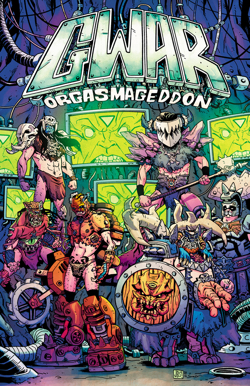 MATT MINER: For the GWAR book I’m drawing from a combination of stuff like old underground comics from the 80s, EC horror comics and bonkers amazing graphic novels such as anything Junji Ito does, but GWAR’s such a labor of love for me, that honestly I’m mostly inspired by the music and movies of GWAR, themselves. Speaking more generally, I’m a massive fan of ridiculously violent but full of depth comics like Preacher that cross boundaries and have you going “did they really just fuck a fish?”

BRENDAN WRIGHT: A lot of the stuff I’ve traditionally opened up for inspiration are classic manga like Osamu Tezuka or Takao Saito, 80s Batman, and 90s Vertigo (R.I.P. Steve Dillon), but in recent years the comics I find myself most excited to pick up have been rawer mini comics, stuff like Benjamin Marra, Charles Foresman, Michael DeForge, Katie Skelly, Michel Fiffe, and tons of others. There’s a directness and DIY vibe to these that I love and that speaks to why comics get under my skin – you don’t have to get anyone’s permission to make them, and living in the muck like we do, you can go anywhere with them, content-wise. If you like Marra’s Night Business or Terror Assaulter, GWAR is for you.

JC: What makes Kickstarter the ideal place to take a project like this one?

Anyways, Kickstarter gives us the opportunity to run a campaign and target press outside of the world of comics – pop culture, horror, heavy metal and punk rock sites. We can reach a lot of people who might not normally read comics and flip ’em into loyal comic readers. I absolutely love comics, and bringing new people into our world is the only way we’re going to grow and thrive

BRENDAN WRIGHT: Kickstarter is amazing not just for disrupting how creative projects are funded, but also how they’re marketed. As Matt points out, a Kickstarter campaign tends to reach different kinds of press than the traditional PR route for most comics, but it also leads to a different kind of coverage within comics, more focused on the people making the book and the ways in which it’s personal for them. If a GWAR comic comes out from a publisher by the traditional means, there’s no way to know until it’s out if it was really a labor of love for the people who made it or if they were just hired hands. When it’s Kickstarted like this, you know the creative team are truly invested – they care so much they’re willing it into being by themselves.

JC: What makes this comic stand out from everything else on the market?

MATT MINER: You’re asking me to “Sophie’s Choice” hundreds of my favorite song babies, Joe. That’s a long list, ranging from Hell-o’s “GWAR Theme” and “Techno’s Song” to Battle Maximus’ “Bloodbath”, with every “Sexecutioner,” “Gor Gor,” “Penguin Attack”, and “Metal Metal Land” in between. I can tell you some of the best videos by far are “Meat Sandwich” where Oderus Urungus dunks a basketball on Jesus, and “Surf of Syn” where a Godzilla-sized baby-eating holy robot trashes the city in an attempt to kill GWAR.

JC: Where can people go to pledge to this campaign and how long do they have?

MATT MINER: Go to GWARkickstarter.com to check out the goods! We’ve got all kinds of limited exclusives for comic fans, signed merchandise from the band, stage used props, original art from both the comic team and from GWAR, exclusive T-shirts and much much more. You’ve got until November 25th to make this happen or (see the Kickstarter video for more on this) Sawborg Destructo is gonna cut open me and Jonathan and play around in our guts.