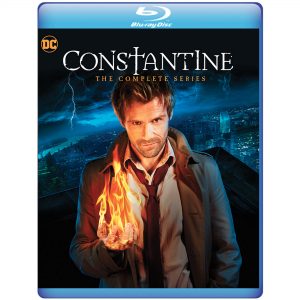 I may have been one of the few to like the 2005 film version of DC Comics’ John Constantine. Yes, it had Keanu and yes it was in Los Angeles, not London, but it was an old fashioned horror film and worked better than it should have.

As a result, I was primed to enjoy NBC”s take on Constantine when it debuted in 2014. It had the right pedigree with David S. Goyer and Mark Verheiden among the producers and cast an act Brit, Matt Ryan, in the lead. What resulted, though, was something interesting and uneven that didn’t catch on with the general audience and was gone after thirteen all-too-brief episodes.

There has been enough interest in the character that Ryan was brought on to reprise his role in last season’s Arrow and he’s voicing John on the forthcoming Justice League Dark animated feature. And now, Warner Archives has released Constantine The Complete Series as a three-disc Blu-ray set.

Properly portraying the supernatural on prime time is tough because the very subject matter is challenging and visually, it needs to be atmospheric and way too often network fare is too brightly lit to work. Here, the overall look is far more subdued and they definitely upped the ick factor so it worked more often than not.

Constantine closely resembles his print origins even if he did smoke a lot less and abstained from his bisexual ways. Instead, we got an exorcist and mystic troubleshooter who got into trouble as he tried to do good. Being a television series, it needed something to act as a through line so they invented the scrying map and drops of blood to direct them to their next port of call, which I found confining and unnecessary.

Being an American production, it was set in the United States so his best friend Chas (Charles Halford) is no longer a cabbie but an adventurer with more than little familiarity with the dark arts. The dynamic from the comic is totally absent here and there was little chemistry between the characters. I also thought Ryan paired well with Lucy Griffiths, who appeared in the pilot as Liv Aberdine, but the producers changed creative direction and she was gone, Replacing her was Zed (Angélica Celaya), taken from the comics; a psychic who added fresh complications to most cases.

There are other nods to the DC Universe here such as a Swamp Thing skull, a Doctor Fate’s helmet, and Felix Faust (Mark Margolis) as a foe and Jim Corrigan (Emmett J. Scanlan) as a New Orleans cop and future Spectre. A recurring foil was Pap Midnite (Michael James Shaw), seen in some of the better episodes.

Had the series been allowed to evolve and grow, I suspect it would have gotten stronger and creepier, freed to explore even darker corners. It’s a shame we’ll never know.

The overall look on high definition is absolutely fine, matched perfectly fine sound. The discs also feature a small handful of special features including: the Constantine trailer; a featurette called “On the Set;” the 2014 Comic-Con Panel Q&A with the cast and creators; and a featurette on the DC Comics Night at Comic-Con 2014 presentation, which also featured Gotham, The Flash and Arrow.