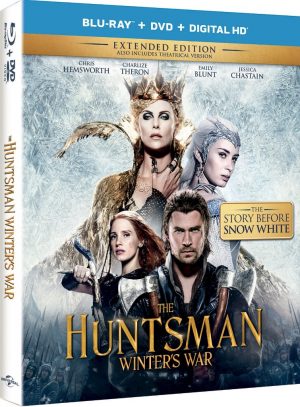 Fairy Tales are also cautionary tales, a way to teach morals and values to children at a time when the majority of the populace couldn’t read or write. It wasn’t until the last four centuries or so when we began writing it all down and solidifying the variations. Even today, people take the classics and reinterpret them for new generations, bringing in modern themes and issues, making them more relevant.

The cautionary tale to take from The Huntsman: Winter’s War is that you have to have something interesting to say. The preceding film, Snow White and the Huntsman, gave us a revisionist Snow White in the form of plucky Kristen Stewart, a modern day action heroine that made her a proactive player in the classic German tale.

Given behind the scenes shenanigans, Stewart was out of the proposed sequel with the emphasis shifting to the Huntsman (Chris Hemsworth) and giving him a new romantic interest and a cool threat in the Snow Queen, loosely taken from Hans Christian Anderson’s story. By making Freya (Emily Blunt) the wicked Queen Ravenna’s (Charlize Theron) younger sister, we now have an interesting dynamic to play with.

Craig Mazin and Evan Spiliotopoulos’s screenplay gives us a lengthy prologue set before the first film and setting Freya has had an affair with a nobleman and given birth to a love child although Andrew (Colin Morgan) has inexplicably killed the child and something goes eerily cold within Freya. We’re told she leaves the kingdom to go find her own castle and land to rule with an icy heart and matching powers (shades of Elsa). Lacking her own child, she orders the land’s children taken from their loving homes and brought to the castle to be trained.

Her two best grow up to become Eric (Hemsworth) and Sara (Jessica Chastain) and of course they have a forbidden romance, which Freya somehow learns about minutes after they consummate their bond. She uses her powers to make each think the other is gone and goes about conquering other lands.

Pause to insert the first film. Now, Freya wants her sister’s enchanted mirror and sends her army out to find it, which Eric has come to protect, aided by the comic relief duo of dwarf ally Nion (Nick Frost) and his half-brother Gryff (Rob Brydon).  When Sara finds them, misunderstandings and hard feelings take time to, ahem, thaw but they realize keeping Freya from the mirror comes first. Along the way, they collect female dwarves Bromwyn (Sheridan Smith) and Doreena (Alexandra Roach) so the comic relief can have some romance.

Ravenna is resurrected, the sisters bicker and play chess, and the good guys arrive to prevail.

Ho hum. All the potential for interesting characters, interesting dialogue and a riveting story was avoided in the favor of boring action sequences, a phoned in score from James Newton Howard, and perfunctory direction from special effects guru Cedric Nicolas-Troyan, making his debut.

There is literally nothing to recommend this dreary tale, out now from Universal Home Entertainment. The high definition transfer is fine, capturing the crystal blues to the deep shadows and the audio track is its match. The Blu-ray combo set comes with a Digital HD copy and arrives in the theatrical and extended version, the latter containing about six more minutes of tedium.

Bonus features include Two Queens and Two Warriors as the female stars talk about the project’s allure; Meet the Dwarfs; Magic All Around, a making of featurette; Deleted Scenes with Commentary (several of which should have made the final cut); Gag Reel; Dressed To Kill with Academy Award®-winning costumer Colleen Atwood discussing the lush outfits worn; Love Conquers All; and a Feature Commentary by director Cedric Nicolas-Troyan I couldn’t bring myself to endure.