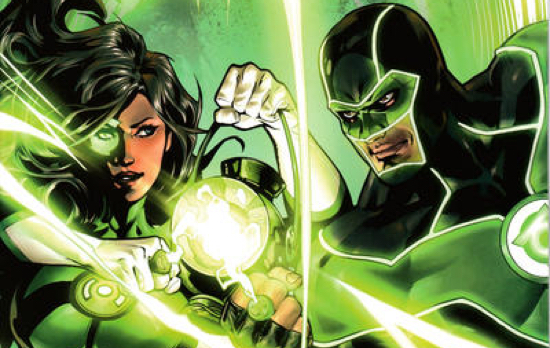 With a wavering hand, I cracked the seal on Green Lanterns: Rebirth #1 and Rebirth: Green Lanterns #1. That was not a typo. Just the crazy dumb way DC Comics wanted to release the first pair of issues concerning their emerald knights in this new and lovey-dovey DC Comics era. I read both books while my four-year-old bathed.

“No, it’s not. Why there two? There not two Gween Wanterns…” Why indeed, Bennett.

Why indeed. Well, as Geoff Johns and new scribe Sam Humphries are rebirthing the GL universe, they start with two distinct directions. Stalwart GL Hal Jordan is called off-world to deal with yet another massive threat that threatens the Corps whilst Earth is defended by a pair of rookie ring slingers: the he’s-not-a-terrorist Simon Baz, and the shut-in-Marc-never-heard-of Jessica Cruz. BazCruz get the flagship Green Lantern book, whilst Jordan will get his own series. And never shall the two meet. Or maybe they will. Who knows?

Concerning myself only with the sans-Jordan book for now, yields a rocky – if promising – start. As I myself came into reading (and loving) DC books by way of Kyle Rayner, seeing rookie ring bearers makes me nostalgic. One of the tent-poles of DC has long been their ability to create legacy in their brands that feels fresh. As the generation that grew up with Rayner, Wally West, Conner Hawk, et al, seeing Baz and Cruz under the domino masks feels like a necessary breath of fresh air. With Jordan off-world, there’s a sense of the larger scale the Lanterns hold in the DCU. And it’s hard not to like the deeply rooted buddy-cop vibe within the new series.

Like all good buddy cop pieces, Baz and Cruz play well off of one another, in spite of the dual-narration script device that forces the reader into lonely territory. Both Baz and Cruz are still light in the loafers when it comes to their characterization. In spite of whatever past exists for them both, I myself here am basically a virgin reader. I read the very first arc of Baz as GL, and frankly forgot it all by the time I cracked the spine on Rebirth. In the broad strokes, he’s the brash, violent, potentially chauvinist ring-slinger prone to hurl a construct first and bark orders at his partner… than to assess criminal situations.

This pairs well then with Jessica, whose lone trait thus far is that she was a shut-in prior to receiving her ring. Normally I’d take pains to look her up on Wikipedia, but I consider this my test of Sam Humphries’ scripting abilities to win my eyes for subsequent issues. Cruz plays the role of good cop decently. She is seemingly more cautious and more curious than Baz. The interplay between them truly feels like a police partnership. When Cruz is shot in the chest with a shotgun by a Red Lantern human puppet (more on that in a second), Baz screams for his partner, but not in that rote Oh my! I loved you all along! way. It’s a scream of concern. No surprise the ring came in handy in ensuring Cruz wasn’t immediately construct fodder. It helps to show both of them being bad at their job.

And what of that job? The big bad of the issue(s) is the Red Lantern Corp leader, Atrocitus. Seems that the New52 wasn’t so kind to his legions, as we find him choking out lead lieutenant Bleez whilst he complains of the dwindling number of red recruits. Never mind the irony of nearly killing one of your own, mind you. Seems yet another prophecy (Red Lanterns love ‘em) about the “Red Dawn” is coming. Helpful then of course that Baz develops Emerald Sight. Apparently the Oans loved Thundercats. But I digress.

Atrocitus sets in motion the erection (natch) of a Hell Tower, as well random Red Lantern recruitments of normal Earth folks, turning them into angry bile spewing meat puppets consumed with random fits of rage. Useful I suppose, as it will provide ample opportunity for Baz and Cruz to decide between using maximum force on would-be rage monsters… or attempting to break the blood curses through less violent ways. And hey, worst case scenario? Baz carries a sidearm because he don’t trust whitey. Ugh.

Ultimately, Green Lanterns: Rebirth is a promising (if a bit slow / shallow) start to a new series. Rookie heroes make mistakes, which make for good drama. Having two obvious minorities filling the role of Earth’s Green Lanterns add a ton of potential for new perspectives on old problems. The potential here is enough to sign on for more. Whether Humphries can deliver on the police procedural structure while delivering originality and depth will remain to be seen… like so much of Rebirth thus far.

I’m optimistic for the future.