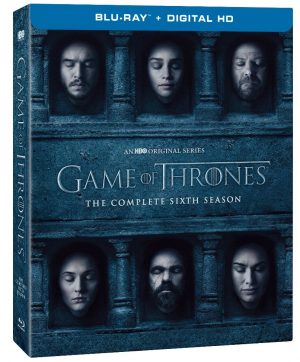 New York, N.Y., July 18, 2016 – Last year’s Emmy® Award winner for Outstanding Drama Series and currently nominated for 23 2016 Emmy® Awards including Outstanding Drama Series, Outstanding Writing, Outstanding Directing Outstanding Supporting Actress (Lena Headey, Emilia Clarke, Maisie Williams) and Outstanding Supporting Actor (Peter Dinklage, Kit Harrington), Game of Thrones is bigger than ever delivering “the power and pathos fans have come to expect” (Los Angeles Times).  The HBO drama has consistently been the top selling TV on DVD/BD for the past five years and now fans can get the most recent season earlier than ever when Game of Thrones: The Complete Sixth Season debuts from HBO Home Entertainment on Digital HD on August 1, 2016 and on Blu-ray™ with Digital HD and DVD November 15, 2016. The set features all 10 episodes, plus extensive bonus content:

Blu-ray™ with Digital Copy – includes all DVD features plus: 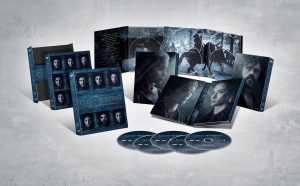 The most-watched series in HBO history and a worldwide TV phenomenon, Game of Thrones returns with another power season. This year, after the shocking developments at the end of Season 5 – including Jon Snow’s bloody fate at the hands of Castle Black mutineers, Daenerys’ near-demise at the fighting pits of Meereen, and Cersei’s public humiliation in the streets of King’s Landing – survivors from all parts of Westeros and Essos regroup to press forward, inexorably, towards their uncertain individual fates. Familiar faces will forge new alliances to bolster their strategic chances at survival, while new characters will emerge to challenge the balance of power in the east, west, north and south.