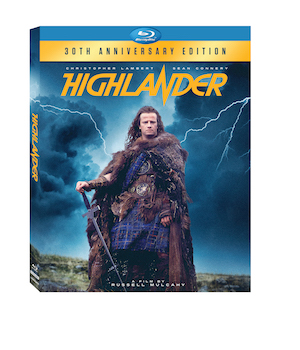 In the end there can only be one Highlander 30th Anniversary edition, arriving on Blu-ray and DVD September 27 from Lionsgate. Starring Christopher Lambert and Sean Connery, relive the sci-fi epic that launched a TV franchise and captivated millions of fans worldwide! The 30th Anniversary edition features never-before-seen interviews with director Russell Mulcahy and actor Christopher Lambert, a brand-new “making of” documentary, deleted scenes, and audio commentary with director Russell Mulcahy. The Highlander 30th Anniversary Blu-ray and DVD will be available for the suggested retail price of $14.99 and $14.98, respectively.

Celebrate the 30th Anniversary of the original cult classic that inspired movie and TV franchises! An immortal Scottish swordsman must confront the last of his immortal opponents, a murderously brutal barbarian who lusts for the fabled “Prize.”