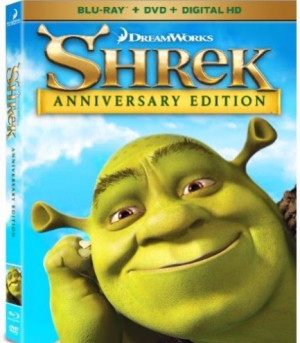 Hard to believe it was just fifteen years ago that DreamWorks introduced us to Shrek. In an attempt to further distance itself from Disney’s fairy tale-driven output, they came up with a contemporary satire that used the very same fairy tales and nursery rhymes but turned them all on their heads with equal doses of charm and cheek.

The first film earned an astonishing $484.4 million worldwide and have us three more films and numerous spinoffs. It helped make gross cool and gave us a delightful soundtrack album with memorable renditions of pop tunes, notably “Hallelujah” by Leonard Cohen.

20th Century Home Entertainment is celebrating with the release of Shrek Anniversary Edition, a single Blu-ray disc containing the film and a bunch of bonus features. There is also the four-film box set with even more green-skinned grossness.

But it all comes down to this first feature, which earned the premiere Academy Award given in the new Best Animated Feature category. All Shrek the ogre (Mike Myers) wants is to be left alone and seems content with his life, until he finds himself dragged into a musical adventure to retain his home, seized by Lord Farquaad (John Lithgow). Along the way he is adopted by Donkey (Eddie Murphy) and falls in love with Princess Fiona (Cameron Diaz).

The film, of course, holds up delightfully with clever asides and sight gags, puns, and twists on expected plot turns. The 93 minutes zips right by and you still smile from beginning to end. The high definition transfer is the same as the last Blu-ray release and holds up just fine, as does the Dolby Digital sound.

This set comes with Blu-ray, DVD, and Digital HD code. The Blu-ray offers up many of the previously released features such as the commentary track with co-directors Andrew Adamson and Vicky Jensen and producer Aron Warner, deleted scenes, Shrek’s Interactive Journey, Animators Corner, Karaoke Dance Party, Secrets of Shrek, Spotlight on Donkey, and The Best of Shrek Shorts.

It’s a shame there is no anniversary feature looking back but that’s the only black mark on the release.

With Comcast Universal buying DreamWorks, one of their top goals is to revive Shrek, who has quickly faded from sight, and restore him to pop culture’s pantheon of wonderful family fare.