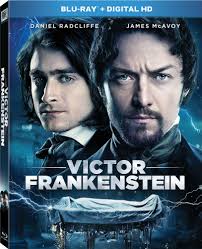 You have to give credit to Dwight Frye, the underappreciated character actor who created the role of the hunchback Fritz, who aided Colin Clive’s Victor Frankenstein in the 1931 Universal adaptation of Mary Shelley’s classic novel. In further Universal installments, the assistant was renamed Ygor and Frye was replaced with Bela Lugosi – but it is Frye’s portrayal that gave the world the stock character forever known to all as Igor.

In the re-envisioned world portrayed in Victor Frankenstein (James McAvoy), Igor is given an upgrade from simple lab assistant to brilliant physician and Frye has morphed into Daniel Radcliffe. Young Victor is actually still in med school as we meet out characters and it is Igor who proves to the brains behind the, ahem, operation.

Max Landis uses both Shelley’s novel and the Universal series of films as guideposts but charts a fresh, if not wholly original tale. Igor’s fascination with circus performer Lorelei (Jessica Brown Findlay) propels the story especially once she is gravely injured and he thinks he can save her. Frankenstein, younger and more by the book at this stage, thinks otherwise.

The two become friends and Victor realizes Igor’s hunch is actually an abscess in need of lancing. Their bond grows deeper as Victor shares his research into the uses of electricity to reanimate dead flesh.

In short order, though, the duo’s life is complicated on multiple fronts, the most dangerous being policeman Roderick Turpin (Andrew Scott)’s improbable realization of the two are doing. There’s plenty here and it doesn’t all hang together terribly well and Landis’ script ultimately does not service the two leads terribly well. All in all, the ideas aren’t bad but the messy result leaves us longing for a faithful and melancholy adaptation of the source material.

McAvoy, Radcliffe, and Scott aren’t given enough to work with and despite their collective talent, the overall performances are flat and lack the manic energy that made us fall for Clive and his successors.

The film, out now as a Combo Pack from 20th Century Fox Home Entertainment, has a just fine high definition transfer with a solid lossless DTS-HD Master Audio 7.1 soundtrack.

Given that the film was a box office and critical flop, the studio didn’t invest much in this release and the extras amount to a handful of Deleted Scenes (14:17) and an electronic press kit compilation The Making of Victor Frankenstein (29:27).