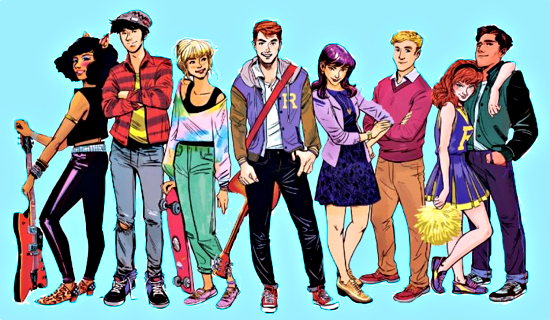 The greatest contribution given to us by the American broadcasting industry is their reimagination of the rubber stamp. So we’ve got a few spin-offs of presently successful comics shows – ABC is toying with a show featuring Mockingbird as an Agents of S.H.I.E.L.D. castoff, and NBC is considering a show called Powerless about superpowerless wannabes who work at an insurance company. Yes, you’re right: we used to call superpowerless people “people.” Now they’re “powerless.” If this one hits air, it might be renamed “Super-Ability Challenged Beings.”

By the way, I hate the word “reimagine” so much that I’m going to start calling it the “I-word.”

So. How many comics-spawn teevee shows can we squeeze into our lives? Surprisingly – well, at least I’m surprised – at least one more.

The CW is shooting a pilot called Riverdale, staring the brand-new, modernized, more realistic, more plot-driven Archie Comics stalwarts. If, like me, you have no life outside of pop culture you might remember this show being under development with Fox. Well, they punted and, quite frankly, the CW is clearly a better fit.

According to the hype, Riverdale is “a surprising and subversive take on Archie, Betty, Veronica and their friends” – I guess this means somebody is going to miss her period – “exploring the surrealism of small town life, the darkness and weirdness bubbling beneath Riverdale’s wholesome façade.” OK, so this show is likely to be less realistic than, say, The Gilmore Girls.

One of the folks responsible for the recent editorial growth over at Archie Comics is their chief creative officer, Roberto Aguirre-Sacasa. He’s also worked on Supergirl, Big Love and Glee. Roberto’s an executive producer of this teevee show. Having a comics person with media chops in a supervisory position on such a program is de rigueur, and it’s a very good sign. So is having Jon Goldwater on board – he’s Archie Comics’ CEO and his family has been steering the Good Ship Archie since the original carrot-top’s creation 75 years ago. Jon can protect the family jewels, and that puts Archie one up on DC and Marvel.

The fact that Greg Berlanti is another executive producer and Riverdale comes from Berlanti Productions is… well… the obvious choice. Berlanti has more comics-related teevee shows on the air than Carter had little liver pills. He produces Arrow, The Flash, Supergirl and Legends of Tomorrow. He also wrote the Green Lantern movie, but we won’t hold that against him. He is, or at least was, attached to the The Flash movie that is unrelated to his The Flash teevee series.

Yeah, I’m intrigued. I’d like to see a teen comedy that speaks to our times. Oddly, the first show that did this was The Many Loves of Dobie Gillis, which Archie Comics felt was a direct rip-off of their property. I can debate that point, but this isn’t the time for that. However, I will say that show contained Warren Beatty’s finest performances.

We’ll see if the CW picks Riverdale up. I just hope that sooner or later they get around to adding Cosmo the Merry Martian to the cast.