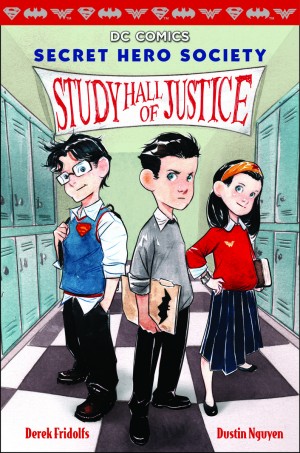 DC Comics and other companies with rich libraries, have decided to slice and dice their properties to fit whatever audience they think they can service.  Fidelity to the source material has become increasingly irrelevant so to enjoy most adaptations, you have to accept that, sit back, and enjoy the work for what it is. Such is the case with the latest offering from the team of Derek Fridolfs and Dustin Nguyen, who produced the youth-oriented Batman: Li’l Gotham for DC and are back with the first in a series of YA graphic novels under the Secret Hero Society umbrella.

Study Hall of Justice is set at the Ducard Academy and Bruce Wayne has just been accepted as a new student. Upon arrival, his keen senses already tip him off that things are not what they seem and throughout this book he pieces the clues together although long-time comic readers will figure it out long before.

The school is run by and populated by an all-too familiar cast of characters, heavily taken from the Batman mythos although the gym teacher is Zod and his homeroom teacher is Mr. Grundy. You chuckle at the notion of Vandal Savage as the history teacher or Siobhan McDougal (a.k.a Silver Banshee) as the choir director.

The students are drawn from around the world with Diana from distant Themyscira and Bane from South America although little is made of the international population. Instead there’s Joe Kerr as the class clown and other students are identified as Oswald and Circe. What’s interesting is that despite a blur suspected to be a student, no other hero is among the middle school population, It falls to Bruce, Clark Kent, and Diana to band together, despite all odds, to figure out why they’re being carefully evaluated for a place called Nanda Parbat.

The humor is gentle and the characterization is surface only as Fridolfs and Nguyen hurry us from September through June in 176 pages with asides for schedules, maps, and chat sessions taking up prime real estate. Fridolfs gets the basic right for the varying personalities, sandpapered down to the 8-12 year old readership. Similarly, Nguyen’s pleasing art makes everyone just recognizable enough although sometimes his characters seem drawn for elementary school not middle school.

Frankly, shoving a year into a single volume deprived the creators from a chance for doing anything fresh or unique with the characters. Instead, the archetypal personalities are on display and yes, they don their familiar outfits for the first time as part of a Halloween event although it makes their later adult secret identities superfluous. I wish more time was spent actually developing the characters from main to supporting so was more engaging.

No doubt the target audience will enjoy these but as a gateway to DC’s collected editions or periodicals, it fails since there is nothing between this and those remotely in common.