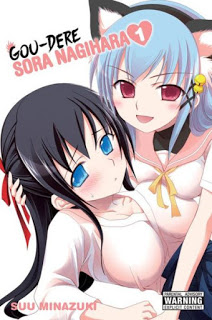 So there’s this guy, see? Name of Shouta. And he’s obsessed with the female lead character in his favorite manga story, which he re-reads over and over again. (He’s otherwise the usual shonen lead character: first-year in high school, glasses, quiet, no friends or respectable hobbies — the total otaku.) And then, on page two of this story, since we need to get going quickly, she appears in his bedroom, falling out of wherever right on top of him.

But, of course, she only looks like the Sora Nagihara of the comics, and has a completely different personality. The demure, shy girl dying of Ali-McGraw-in-Love-Story disease of the comics has manifested in Shouta’s real world as a raging sex-obsessed force of nature. Since this is a humor comic, she’s not obsessed with actually having sex herself — that would be too easy — but with making sure Shouta has a lot of sex with random women and thus populates the world with his offspring so he can rule the world. (This last doesn’t make any sense, and probably isn’t supposed to — it’s big and bizarre and funny, probably more so to the Japanese.)

Again, probably because of the Rule of Funny, Sora’s efforts to strip and degrade the young women near Shouta result in Shouta getting arrested, and then immediately released. (Because if there’s a girl running around ripping off other girls’ clothing and spraying them with various thick viscous substances, the thing to do is declare the closest man responsible, right? This series finds new and different ways to fail feminism on nearly every page — it’s quite breathtaking.) Oh, and some of the girls thus harassed are actual characters — like the tough-as-nails head of the dorm where Shouta was living, and the schoolmate who lets him (and Sora) stay with her family when he inevitably gets kicked out of the dorms — who both blame Shouta for Sora’s actions and yet never become entirely hostile to him. Oh, and the other male characters (only two of them, notably) are really weird, over-the-top martial-artist types, grown-ups who are even less connected to what we’d call reality than Sora.

Hmm. Know what we’ve got here? It looks like a harem manga, And a particularly baroque, self-aware one, at that. Shouta is very much the standard nebbish, though Sora is more specifically all about sex in her plot-driving wackiness, but otherwise it follows the pattern very closely — down to the one girl that the hero really loves, even amid all of the crazy sex-comedy going on around them. (Though Gou-Dere is a self-aware harem manga; it lampshades that relationship a good two volumes before it even really pops up as a serious thing.)

Things get more complicated from that beginning, of course, as they must — the whole point of a harem manga is that things get more complicated, until only the most devoted readers can even tell who all of the various girls are and what their individual very specific personality quirks are. (This is probably the point to mention that “gou-dere” is a Japanese manga-girl descriptor which essentially means “fanatically devoted to her master and particularly to obtaining nubile females for him to impregnate.” The title of this series could literally not get more on-the-nose. You know how Inuit languages supposedly have a hundred words for snow? Well, Japanese manga readers have at least that many terms to describe the vast number of commedia dell’arte-esque standard characters that pop up in story after story.) But it’s all harem manga-style stories, and knowingly so — they go to a hot springs, for example, and Sora comments on the genre expectations.

This is culturally specific humor, like a lot of manga — it comes out of a culture where being polite and quiet and  worrying about others is the very most important thing that you have to do every single moment of every single day. And so breaking that norm — as broadly and completely as possible, in the most shocking ways possible — is a source of humor. I personally found Gou-Dere more weird than funny, but I’m not part of that culture. If you are culturally Japanese, or very deeply invested in that culture (as a lot of Westerners are), you’ll probably find this more immediate than I did. But even if this doesn’t hit you the way it’s supposed to, it’s still an intensely weird, self-consciously genre work, and it’s interesting to see that play out, even if the specific genre elements are not as familiar.