Whatever Happened to the World of Tomorrow? by Brian Fies 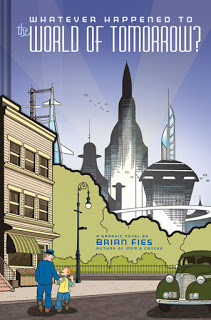 Building and sustaining a career as a graphic novelist is even harder than the equivalent for a prose writer: comics require at least twice as much work per page (writing and drawing — sometimes inking and coloring and lettering, too) for something that’s read in a fifth of the time. And that turns making comics, especially mid-list comics, into a time-sink which has serious trouble delivering monetarily on a level with the effort required. And yet people keep trying, like any artform: there are always people with stories to tell and images to share, and some of them manage to turn that into a career along the way. (Others fail entirely, or do a couple of stories and then move on to something else.)

Brian Fies is an interesting case along that continuum. His first major graphic story, Mom’s Cancer, was a memoir comic that originally appeared in installments online, about ten years ago. That attracted attention, and got reprinted as a book, and the book apparently did well. His follow-up, Whatever Happened to the World of Tomorrow?

, came four years later — quite fast for a two-hundred page book written and drawn all by one person — and was more thematically and conceptually inventive, a switch to mostly fiction, but eventually, it seems, was not quite as successful as his first book.

(This is really common: the disappointing second book/record/gallery show is a cliche across many media. Sometimes the disappointment is commercial, sometimes critical — and sometimes it doesn’t exist at all, which then is the surprising story in that case.)

Fies hasn’t yet put out a third book in the six years since Tomorrow. (Though, again, remember that comics take time to make — time to work up the idea, time to write, time to draw, and then all of the usual publishing stuff. And that often has to happen in between or on top of having a regular job.) And so outside observers like me wonder if Tomorrow was a disappointment to its publisher — though an outside observer can never figure that out, since it depends entirely on costs and payments and expectations.

I’m not the best reader for Tomorrow, temperamentally: it’s a thoughtful, careful fictionalization of the “why don’t we have jetpacks?” line of complaint, and I’ve long since gotten sick of that from hearing it in SF circles for around thirty years. [1] This particular incarnation of that argument starts with the New York World’s Fair of 1939, possibly the very height of technological optimism, and mildly asks why the dreams embodied in that fair never came true.

(How many dreams ever come true? But we’re not supposed to ask such questions.)

Tomorrow focuses on a father and his son — Pop and Buddy, as Everyman and Everyboy as Fies can make them — on a visit to the fair, where they’re thrilled and inspired by the wonders they see there. Fies clearly means these two to be iconic rather than real people, but, to my mind, that’s ignoring the more important questions: I found myself wondering about the rest of their family, about what Mom or Big Sis would make of these particular technological wonders, and if they would be as impressive to them. (Or what Grandpa, who already went from horse-and-buggy to airplanes and ocean liners, would say. Pop does have a speech along those lines, but it’s all in the service of Progress Always Thrusting Forward.)

After the Fair, Tomorrow presents a series of snapshot chapters in the middle of each of the next four decades — 1945 through 1975 — in which Pop and Buddy appear at the same ages as they were in 1939. (And there are still no other members of their family: no mother or hunt of what happened to her, no other siblings, no extended family — just two men, older and younger, and their technologically-mediated father-son bond.) So they witness V-E day, build a fallout shelter in the basement, watch a Gemini lift off from Cape Canaveral, and finally the Apollo-Soyuz separation — almost all specifically space-exploration moments, like yet another sour Stephen Baxter story about how the author didn’t get to visit Moon Base Alpha like he was supposed to.

And there’s a lot of narration along the way, as “Buddy” tells the reader all of the space-related history in each ten-year span — all still very much like those whiny “I was promised a house on Mars!” stories from SF magazines of 10-15 years ago. Again, I have never little patience for that viewpoint: I’ve heard it too many times, and I never bought into it myself. The Space Race is a thing that happened for geopolitical reasons, not scientific or exploration reasons, and it ended when those real reasons were no longer as powerful. There was no aim of history, no majestic purpose to spread monkeys in tin cans throughout the universe. And Tomorrow has a coda at the end — with Pop and Buddy finally broken free from their static ages — that somewhat addresses that, talking about the actual technological changes in the years since 1975. But it’s also unabashedly still in the tank for the “man must conquer the universe with big phallic rockets!” idea, as if the last forty years was just a pause in the Inevitable Thrust of Man.

Tomorrow is an attractive, very well-presented version of an argument and a viewpoint that I rejected long ago. Other readers may be less negative towards the agitprop and thus be able to enjoy the book itself more than I did — I’ve just seen this very same kind of story too many times before, by too many writers around Fies’s age (fifty-ish, just old enough to be kids during the Apollo years and thus indoctrinated to expect they would go to space some day) to believe in it. And I’m young enough — I don’t get to say that very often, these days, so I’ll take any chance I can get — not to be part of that cohort; Apollo was dead by the time I was old enough to care.

If you love space, and the promise of ever-better transportation, and the dreams of the Space Age, you really will enjoy Whatever Happened to the World of Tomorrow? In fact, if you’re just not nearly as negative about those things as I am, you’ll probably like it quite a lot.

[1] Short version of my comeback: geometric growth, in anything humans do, always flattens out. It never hits the asymptote, or comes close. We know this in general, but we keep forgetting it for specific cases. So the Transportation Singularity didn’t happen: we didn’t get ubiquitous flying cars or jet-packs, we can’t go to Mars for a vacation, and FTL is still a pipe dream. Similarly, the Information Singularity won’t happen either, for similar reasons. Any prediction that contains “and then it goes on just like this for a long time” is bullshit.