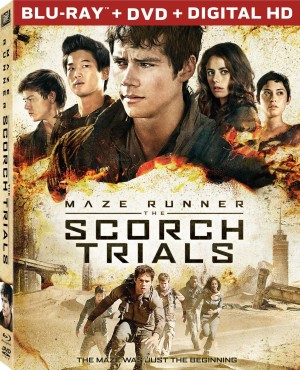 Young Adult novels tend to work best when they are metaphors for their readers’ lives. James Dashner’s Maze Runner trilogy certainly applied the zigs and zags of an adolescent’s development to that of a maze where the wrong turn can have devastating consequences. The books sold well and in the wake of The Hunger Games’ success, they were naturals for screen adaptation.

The first, 2014’s Maze Runner, was nowhere near as engaging with flat characters and a dumb, unsustainable society of teens. We were left with the gaggle of teens getting out from the maze and into its inner workings.

Once they find Mr. Janson (Aidan Gillen), they are told their safe so we know long before they do that the gang is anything but safe. Right there is the film’s problem as the worldbuilding is flabby, the character development is nil but the action quotient is high, trying to mask weak storytelling. It’s a shame screenwriter T.S. Nowlin and director Wes Ball, returning for a second trip to dystopia, didn’t take the time to deepen the players and make the audience care. Instead, they do a fine job with the running, jumping, and exploding but that reduces the cast and Dashner’s story to the plot of a video game.

We learn the Flare virus remains a threat as does Ava Paige (Patricia Clarkson), representing the evil WCKD (get it?) but we are also introduced to The Right Arm, the resistance movement led by Vince (Barry Pepper) and a gaggle of others who will work with Thomas and Teresa to overthrow the bad guys in the third installment, The Death Cure, due in 2017.

At 131 minutes, the film could have used some tightening that would have allowed the characters to feel like people like chess pieces. The bloated production needed some nipping and tucking to help with a slow first half and better second.

Still, the high definition transfer at AVC encoded 1080p in 2.40:1 looks just swell so you can watch things blow up just fine, paired well with the DTS-HD Master Audio 7.1 mix.

The combo comes with Blu-ray, DVD, and Digital HD so they have you covered. The Blu-ray comes with a nice assortment of extras starting with Audio Commentary from Ball, Nowlin, producer Joe Hartwick, Jr. and editor Dan Zimmerman; Janson’s Report (Classified) (4:57) , an assortment of “confessionals”; Deleted and Extended Scenes (17:58) with optional commentary by Ball, Nowlin, Hartwick, Jr. and Zimmerman; Secrets of The Scorch (52:15) , a compilation of featurettes with the standard behind the scenes footage and cast and crew interviews; Gag Reel (15:02); and Visual Effects Breakdown (1:06) with commentary by Ball; Visual Effects Reel (29:55).

One unique touch is a Maze Runner comic book being included.