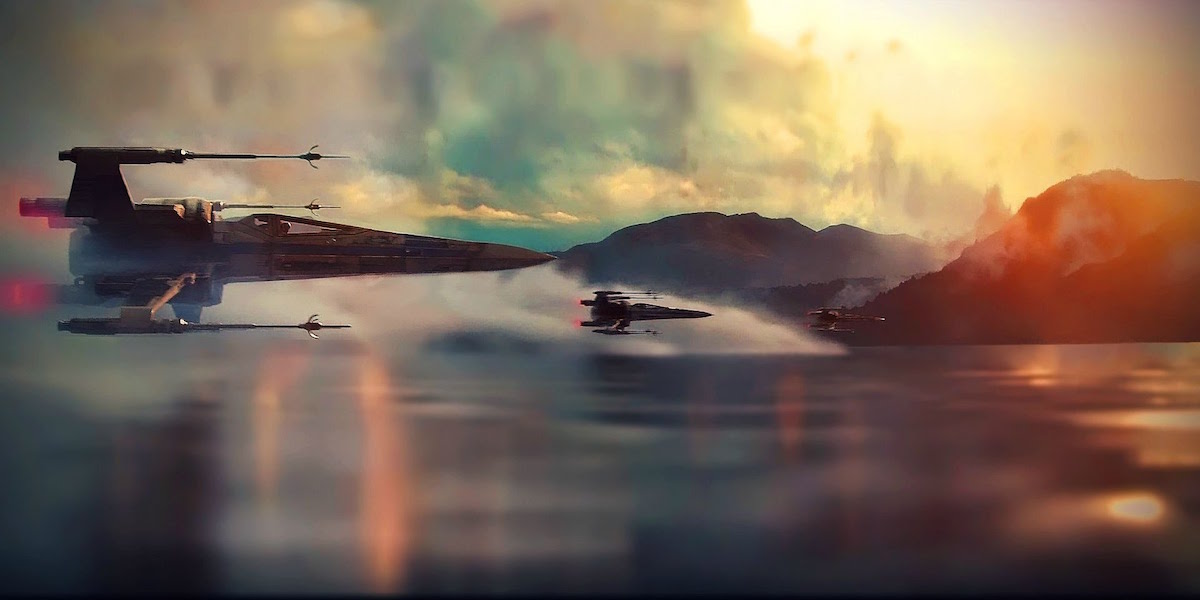 The first movie I ever reviewed was Attack of the Clones and I gave it a rave review, the kind of review I would never give it now that I consider it to be arguably the worst movie in the entire franchise. In my defense, I was 17 years old and mostly just didn’t know better when it came to dialogue, character arcs, or any facets of compelling filmmaking that weren’t balls-to-the-wall lightsaber fights. I walked out of every one of the prequels happy and only turned on them with time and perspective, and that’s why I’m afraid now to write about how thoroughly I enjoyed The Force Awakens because now these words might actually stick around.

From here on out I’m going to talk about the plot so if that’s not what you’re interested in, now is the time to head somewhere else.

There aren’t a lot of new story beats in The Force Awakens, in fact it seems like it follows the road map from A New Hope faithfully, but after hearing George Lucas go on and on for years about how the prequels were supposed to “rhyme” with the original trilogy this is hardly surprising. We don’t come to Star Wars for original or complex plots, we come for the skillful implementation of iconic moments. This is a franchise that started by ripping off Hidden Fortress and hasn’t had a great many original ideas since that weren’t about selling toys in fun new ways. The Force Awakens is a story I’ve heard many times before in a more dynamic wrapping.

J.J. Abrams is a better director than George Lucas in every way that counts, and it is almost cruel how they show that off. The original trilogy understandably looks a little dated at this point three decades in the future but fancy visual effects aside the prequel trilogy has aged terribly, they simply don’t share a visual vocabulary with their peers. The shots are largely static and the compositions boring; there seem to be more variety in the transitory wipes than in the set-ups. Abrams has a lot of flaws but he know how to move a camera and he knows how to shoot a good action scene and that’s more than enough to knock this movie out of the park. There’s one sequence that feels like a lumpy, out of place, mashup of Firefly and Men in Black full of just-too-cutsey cameos, but other than that I was suitably riveted to my seat for the entire film and that’s becoming more and more rare for me.

I love all of the new principal characters without reservation. John Boyega is utterly fantastic as Finn. He’s able to display such a depth of turmoil, he instantly becomes one of the most kinetic characters in the entire mythos. I’ve been a huge fan of his since Attack the Block and I’m thrilled to see him live up to all that promise and more here. Daisy Ridley is the new face of the franchise, and the way she shows the scars of her abandonment while similarly embodying the Luke Skywalker role for a new trilogy is most impressive. She doesn’t get a striking hero shot gazing in to a binary sunset, but she nails everything else about being a Star Wars protagonist. Her facial expression work in the climactic battle is worth the price of admission alone. Oscar Isaac is underused but his charisma is so strong he looms large over the movie and is just so alarmingly good looking, I’m not sure it’s safe to photograph him much more anyway. I liked Adam Driver more in his turn as Kylo Ren than I’ve liked him in anything else I’ve seen him in. He does about half the work in the biggest, most impactful scene in the movie and he feels right in that spot. He’s everything that Alec Guinness, Harrison Ford, or Ewan McGregor brought to this franchise and those names are good company.

The Force Awakens is a good action movie, it builds off of and feeds the endless churn of mythos needed to keep Star Wars afloat as an intellectual property, it creates new and interesting characters, and it gives them compelling places to do exciting things in. I don’t know what to want besides this. It isn’t exactly the same as seeing A New Hope for the first time when I was five years old… but nothing ever will be. This is the modernization the franchise needed, and it’s as good or better than every sequel I ever chased through mediocre novels throughout the years.

Star Wars is back and better than ever.