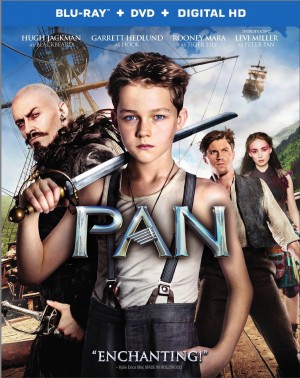 You have to begin by asking yourself, do we really want an origin story for Peter Pan? J.M. Barrie certainly didn’t seem to think we needed it when he first wrote the play Peter Pan, or The Boy Who Wouldn’t Grow Up in December 1904. The book we’re more familiar with, Peter and Wendy, didn’t arrive until 1911.

However, we have been conditioned to expect to understand everything there is about a character and too often we’re given origin stories that dilute the action. So, one has to wonder why Warner Bros and director Joe Wright felt we needed Pan.

The overwrought, over-produced production got bumped from summer to fall only to flop big time and is out now on Combo Pack from Warner Home Entertainment.

The idea of the boy who never grew up, who had wild escapades in Neverland should be sufficient lure for audiences. It certainly worked for Disney and Mary Martin but today, that’s not good enough.  Rather than a story to enchant children, this is aimed squarely at those of us to achieve adulthood and long for simpler days of youth.

The action is, we’re told, tamped down for younger audiences but it’s still in your face with a riot of colors, sounds, and frenetic energy that diminishes a script by Jason Fuchs (Ice Age: Continental Drift) once considered so strong it made the infamous Black List of great, yet-unproduced screenplays. 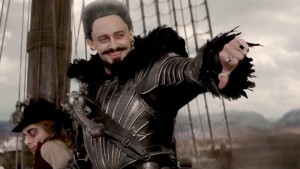 Working from the familiar set pieces we’ve come to love, Fuchs takes the youngster Peter and sets him on the classic hero’s journey taking way too many liberties from the source material to satisfy.  Young Peter was abandoned by his mother, Mary (Amanda Seyfried), leaving him to be raised by the cruel Mother Barnabas (Kathy Burke).  Even though Barrie’s story was set at the turn of the century, we’re somehow told its World War II and the London Blitz is on. Peter (Levi Miller), now 12, and his friend Nibs (Lewis MacDougall) find out Barnabas has been hoarding food and there’s a letter from Mary foreshadowing how “special” Peter was meant to be.

Peter escapes the Nazis, snatched up Bishop (Nonso Anozie), aboard his flying pirate ship. The man is collecting orphans to work as slave labor. Upon arrival, Peter meets the infamous Blackbeard (Hugh Jackman), the mine’s overseer. Now Fuchs wrote the part for Jackman and used the pirate because Barrie established it was he who trained Hook – so what’s a sea-faring man doing in a mine? Jackman’s plays the part as if it were a Broadway production, chewing his beard or the scenery. 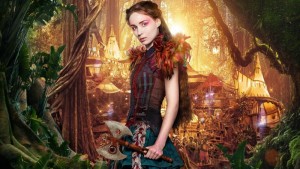 What are they mining? Pixum, or crystalized fairy dust. Uh huh.

We quickly meet the other denizens including Princess Tiger Lily (Mara) and her father (Jack Charles). Then there’s James Hook (Garrett Hedlund), cast in the swashbuckling role one expects from true pirates of yore. Hook is not Peter’s arch enemy yet but all the warnings are in place.

You get the idea. The movie is overstuffed with sets, characters, and anachronisms galore which spoils the sense of wonder the movie should have created. Wright’s a capable director but not here. Instead of something special, like Peter was meant to be, this movie can’t make up its mind what it really wants to be and who its audience should be. As a result, it leaves children overstimulated and parents shaking their heads in disappointment. 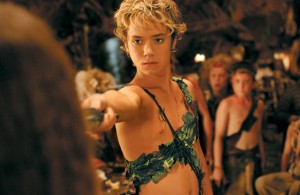 The Blu-ray transfer is just lovely, which is needs considering the visuals.  The 1080p, AVC-encoded result maintains the rich colors just fine. There’s a 3D version but this was not screened for review. The Dolby Atmos soundtrack is strong.

For a film boasting so much effort, the special features prove disappointing. You start with Wright’s commentary which shows his head and heart were in the right place, although his defense of using “Smells Like Teen Spirit” fails to convince. There’s also Never Grow Up: The Legend of Pan (10:50), which does a nice job showing us how Barrie’s story grew from stage to book; The Boy Who Would Be Pan (6:07) introduces us to Miller, who at least looked age appropriate for Pan; The Scoundrels of Neverland (5:49), explores the pirates and Blackbeard’s origins; and, Wondrous Realms (5:01), a promotional tour of Neverland.