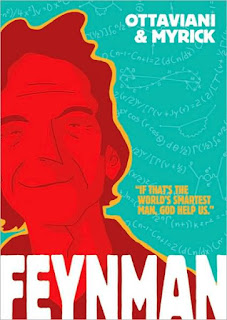 There are times when I doubt that Feynman

could possibly be real. A wild man physics savant who was also  a world-class womanizer, bongo player, and practical joker? No, no — that’s a fictional character, not a real man. But the world then gently points out that he was real.

Ottaviani has made a small career in comics out of telling stories about science and scientists, and this latest book-length graphic novel fits well into his oeuvre. Feynman is the most interesting scientist of the 20th century, beating out even Einstein and Hawking — quirky, fun, endlessly quotable, but still clearly brilliant at really esoteric theoretical physics and creator of a major explanatory theory that hardly anyone has ever understood.

(I know much less about Myrick — he’s got a lot of credits, but I haven’t seen much of his work. He has a slightly cartoonier style than I’d expect for a biography, which means his Feynman looks only slightly like the real man, but he has the skills to tell this story well, despite a lot of talking heads and big caption boxes.)

Ottaviani mostly tells Feynman’s story straight through, with a few digressions for style and framing. He uses unobtrusive captions to place each scene in a time and place, jumping forward occasionally to use a major lecture or discovery to frame earlier events. It makes what could have been a dull life — Feynman, for all of his energy and wit and wackiness, spent most of his time lecturing, writing, or sitting in a chair thinking about physics — into a thoughtful graphic novel that mediates on an interesting life lived well.

I expect this will mostly be read by physics nerds and young readers — it’s the kind of thing
that teachers and librarians hope will snare some resultant reader into a life-long passion — but that’s fine. Feynman was both of those things, in his time, and I think he’d be glad of the company.