John Ostrander and The Humbug Murders 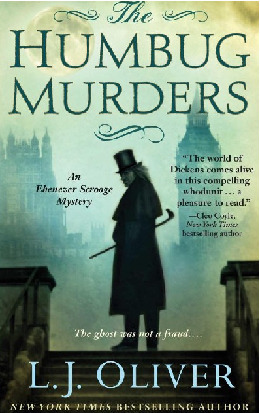 I’m a big fan of Charles Dickens’ A Christmas Carol. I try to read it every Christmas, I watch multiple versions of it during the holiday season (including a half hour animated version starring Mister Magoo), and in my acting days I performed in the annual theater production of it at Chicago’s Goodman Theater. For the record, I played in the all-important parts of Mr. Lean, Fred’s friend number 3, dancing man, and ensemble.

Coming across a mystery called The Humbug Murders – An Ebenezer Scrooge Mystery by L.J. Oliver, I was quickly drawn in. Not without some hesitation; the notion of Dickens’ notorious miser acting as a detective rattled my chains a bit. Still, I decided to give it a chance.

For the most part, it works. L.J. Oliver is a pen name for Scott Ciencin and Elizabeth Wilson, both of whom are experienced authors. Sadly, Ciencin died in 2014. The story takes place in 1833 when Scrooge was still a relatively young man, only a few years removed from his days working for Mister Fezziwig. The story includes quite a number of characters from different Dickens’ novel as well as a young Dickens himself, still a reporter at this point.

I usually have trouble when authors place characters and creators in the same story. For example, I’ve seen Sherlock Holmes stories were Arthur Conan Doyle is also a character and it is said that Doyle is the “literary agent” of Doctor Watson. These arrangements suggest that the author didn’t have the imagination to create his/her own characters and, as an author, I dislike that insinuation.

Also, I had to reconcile the Scrooge in this mystery with the Scrooge I knew from A Christmas Carol. That was a bit difficult. It was hard to imagine the Scrooge that I already knew having had the experiences he had in this story and still becoming the same man. However, I simply decided that this was the Scrooge of an alternate, parallel dimension. Hey, I work in comics; alternate dimensions are an everyday occurrence where I come from.

In The Humbug Murders, Old Fezziwig, Scrooge’s former employer, has been brutally murdered. (The story has a goodly amount of rather graphic violence and touches on some lurid depravity, all of which may bother some folks.) Scrooge is a suspect and finds himself drawn into the mystery. A masked murderer calling himself Humbug is guilty of the crime and Old Fezziwig’s ghost (of course there are ghosts in the story), appearing to Ebenezer, says three more deaths will follow and that Scrooge himself will be the last victim. Unless, of course, the killer can be caught first.

The authors know the era and the locale, especially the less savory neighborhoods in London. They also know their Dickens and sometimes get a little cute in borrowing lines from A Christmas Carol. It sort of shouts “See how clever I am!” It also took me a little out of the story which an author should never do.

The reveal is a little difficult, requiring the killer to monologue in order to bring it all together. Scrooge himself, although a keen observer of humanity, doesn’t really uncover Humbug’s identity. The lead female character also comes across as a bit of a Mary Sue – the somewhat idealized projection of the female author.

Mostly, it’s a good mystery although I did spot the true killer some fifty pages before the reveal. It didn’t take away from my enjoyment of the book, however. The ending promises a possible sequel which I wouldn’t mind reading although, since Mr. Ciencin died, that may be problematic. It was not a waste of my money which, no doubt, Mister Scrooge would consider a high compliment.