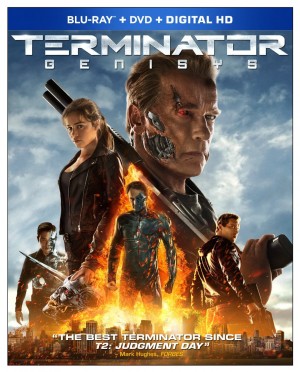 There was a wonderful science fiction romance in James Cameron’s original 1984 film The Terminator. It had a touch of everything: time travel, killer androids, romance, and hints of a technology gone haywire. It was shot on a modest budget with a familiar but not star cast, anchored by the hulking presence of Arnold Schwarzenegger.

Ever since, though, the sequels have tended to eschew the original themes in favor of retreading immortal lines of dialogue, action pieces, and the eternal struggle between man and machine. With the exception of the first sequel, which introduced the world to the joys of CGI, they have been a middling mess. Even Fox’s The Sarah Connor Chronicles had more to do with a terminator trying to kill Sarah and/or John Connor than the large themes of man versus technology. 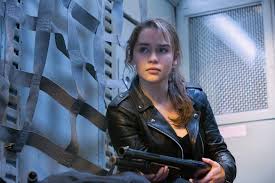 Therefore, it was refreshing to get back to basics in this summer’s Terminator Genesys.  The property is now in the hands of Paramount Pictures that wanted to refresh and reinvigorate the franchise. The reboot, out Tuesday on disc from Paramount Home Entertainment, does not ignore what came before it, but does also carve out a reality of its own. Right there is one of the more confounding aspects of the premise, since it starts in a parallel timeline merely paying lip service to the prime timeline (a similar conceit occurred in 2009’s Star Trek, also from Paramount). By presupposing you know the core elements, it defeats the fresh start aspect, keeping new audiences from falling in love with the T-800, Sarah, John, and Kyle Reese. 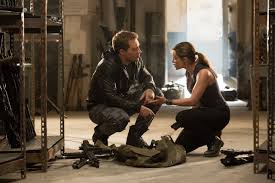 The script from Patrick Lussier (Dracula 2000) and Laeta Kalogridis (Birds of Prey, Bionic Woman) requires a flow chart to determine which characters and elements belong to which timeline. We have a final showdown with Skynet in 2029, which has the human resistance accessing their time travel device. John Connor (Jason Clarke) sends his best friend Kyle Reese (Jai Courtney) back to 1984 in order to protect Sarah Connor (Emilia Clarke) from the T-800 (Arnold Schwarzenegger) he knows will be sent to kill her. However, Reese arrives to see a T-1000 (Lee Byung-hun) on the attack and the Sarah he meets already knows her future. And more, she’s protected by an aging T-800 she calls “Pops”.

The timelines are altered the moment Reese is sent back in time and he crosses paths with his younger self who passes on the message, “Genesys is Skynet”. He knows what he needs to do but it immediately puts him at odds with Sarah, who hates feeling trapped by fate, reminded regularly by Pops that she is destined to mate with Kyle in order to produce John. He convinces her to come with him to 2017 to prevent Genesys, the killer app that will totally connect everyone and every device (I guess Linux, iOS and Windows) in one massive network. It would also give rise to the artificial intelligence that becomes Skynet (and takes shapes as Matthew Smith) and will determine humanity must be eradicated.

Then things blow up a lot. 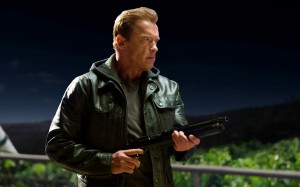 By the exhausting conclusion, people and things are put into place establishing a new status quo, a timeline not beholden to anything that came before. As a reboot, it’s fine. As a movie, it lacks some of the needed warmth and reason to exist. The post-credit scene hinting at a sequel was entirely superfluous and given the dismal box office, Paramount’s sequel plans are on indefinite hold. Producer Dana Goldberg admitted last month that they are taking time to find out what didn’t work for audiences so they can retool and try again. They’d better hurry since Arnold is already 67.

Emilia Clarke makes for a marvelous Daenerys on Game of Thrones but frequently lacks the steeliness we expect from Sarah, as previously depicted by Linda Hamilton and Lena Heady. On the other hand, she brings a warmth and humanity to Sarah not seen since the first film. Her chemistry with Schwarzenegger is strong, allowing us to enjoy his performance, which can border on self-mockery. 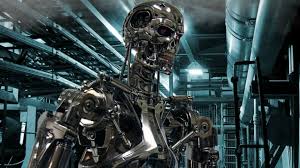 Courtney and Jason Clarke are far too earnest and saddled with stiff dialogue, robbing them of chances to be real people rather than archetypes.

Still, the scene stealer throughout the film is J.K. Simmons as a cop who witnessed the events in 1984 and is the only one to believe Sarah and Kyle in 2017.

Visually, Alan Taylor (Thor: The Dark World) does a nice job with the sets, special effects, and action sequences. He’s less successful with people which is odd considering he cut his teeth on the character-heavy series Homicide, Oz, The Sopranos, and even Thrones.

The movie looks terrific on screen with a nice high definition transfer.  The Dolby Atmos sound track is even better so the hoe viewing experience is a strong one.

There are various versions to pick from including the standard Blu-ray, DVD, and Digital HD combo which was reviewed. The Blu-ray comes with just three bonus features: Family Dynamics, a look at the casting process as the crew extolls their various virtues; Infiltration and Termination, which explores the location shooting in San Francisco and New Orleans; and Upgrades: VFX of Terminator Genesis. No deleted scenes, commentary, or even gag reel.