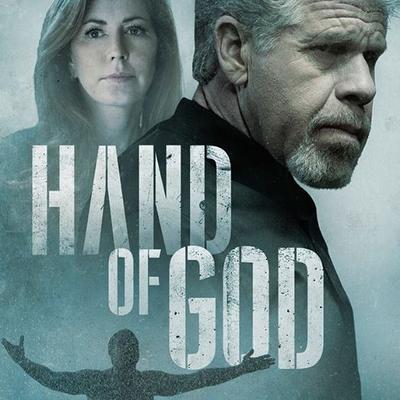 is a perfectly enjoyable TV show that has fallen in to the same trap that dozens of other shows in the last decade have fallen in to: it isn’t the high art it thinks it is. This isn’t The Sopranos or Breaking Bad or The Wire. It doesn’t reach the depths of John from Cincinnati or The Leftovers because it has a dynamite cast and a clever premise but it isn’t quite as clever as it thinks it is. It wants to be a spellbinding mystery but it just isn’t that well crafted. Hand of God is a marvelous show to get lost in but if you look to closely you’ll see how poorly tended the forest is.

There’s a lot of top-notch acting on Hand of God and I’m not entirely sure if I mean from series lead Ron Perlman. Perlman chews the scenery as is his wont and it works, he’s a very convincing man having a psychotic break but it’s the rest of the cast that does most of the heavy lifting, perhaps because they have to ground this insanity. Dana Delany is the standout; she gives a tour de force performance where seemingly every episode has her pushing at some new corner of her character but in a way where the myriad personality revelations feel organic and not contrived, and this is a show that knows its way around contrived. Andre Royo is a delight as always, but I’m not sure it was the perfect directorial note to tell him to play the mayor of a small city the same way he played Bubbles. Camryn Manheim has a two-episode arc as a psychiatrist that is just so perfect and the exact energy the show needed and I sincerely hope she’s brought back if the series continues.

The thematic content in Hand of God all worked for me. Pernell Harris (Perlman) is a judge in a small town who starts to get what he believes are divine hallucinations after the attempted suicide of his son and he believes he has to use these to solve the sexual assault of his daughter-in-law. Pernell gets drawn in to an evangelical born-again church that has cropped up in his town and all of the ways they tie the various plot lines in to these religious narratives was effective for me. It’s not a groundbreaking piece of theological discourse or anything but it’s fun to watch and to talk about with other people watching, especially when the alternatives are some of the grislier aspects of the show. “Do you think those were really divine visions?” is a fun question to ask, “what do you think happened with that parking lot murder?” is not.

Where Hand of God falls apart is the story. It’s clear that the show wants to be a sweeping mystery that people discuss how clever it is; it wants to be Scandal at a confessional but is missing the complexity. Unless I miscounted, all but one of the series regulars has a big secret related to the central mystery and most of them are pretty obvious. There are no red herrings, everything just leads linearly to the next thing and the only way to not be ahead of the plot is to just not be paying enough attention. It’s an awkward feeling when the show thinks it’s making a big revelation and the audience watching look at each other and shrug. I’m interested in some of the loose threads they left for a potential season two so it’s not as if this is a total loss, but every thread that wasn’t loose was tied in to a too perfect bow for my taste.