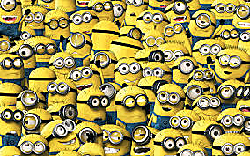 Minions has been taunting me for weeks. As part of the promotional campaign for this movie Universal decided to cover the old Cinerama dome on Sunset Boulevard with inflatable versions of the films stars reaching for a giant banana. It’s a cute enough gimmick I suppose but I go to the gym in a building directly behind the dome so for about an hour a week three times a week the view from my gym has been dominated by massive inflatable Minion asses. If the exercise bikes I prefer somehow became untethered I would pedal myself directly in to the backside of a five story Minion.

After seeing the film I think I got most of the experience just watching them endlessly reach for that banana, as that’s about as much story as the movie Minions actually bothers with.

The Minions, as characters, are empty vessels. Their personalities only extend one adjective deep before you get to the common Minion traits like hungry or covetous. In a way this has led to the success of the characters as they are whatever the viewer imagines them to be (this is why they’re so perplexingly meme-able) but there’s no actual character underneath. Each scene is driven either by external factors or an often-nonsensical want. Sometimes Bob is really emotionally invested in the safety of his teddy bear but when that isn’t driving him through a scene it’s never even pictured. I feel like I’m asking too much of a silly little kids move that is such a transparent cash grab but when the characters don’t resonate the actions have no stakes and I just can’t laugh at these jokes past the first fifteen minutes. Something has to make you care about the story and it never happens.

The humor of Minions is not for me but I don’t think it wants to be. This is slapstick humor for a generation who don’t have Saturday morning cartoons to watch. People fall over, people het hit with stuff, people slip and fall, all the hits really. There’s nothing wrong with this per se; it’s been the foundation of comedy for all of recorded history but there’s precious little new ground to break and I’m not sure I think Minions is even trying.

There’s no effort apparent throughout Minions but honestly, why would there be? This is a franchise born from another successful franchise, it’s sold countless t-shirts and toys and even has a theme park ride, and everything from here on out is found money for Universal. It’s a monster that feeds on its own popularity and nothing we can say or do will stop it. Or it’s just a silly kids movie and I should really just relax.