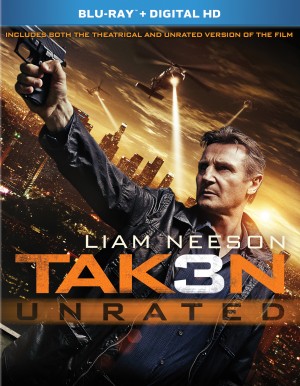 The Taken franchise has worked at all thanks to two people: Luc Besson and Liam Neeson. Besson has seemingly been coasting since 1994’s The Professional and certainly has returned to familiar territory with this franchise. Neeson has stopped showing his considerable acting chops by going the action route pretty much since he picked up a lightsaber. Despite its utter predictability, the first Taken proved enormously popular, especially considering its early 2009 release date.

The inevitable sequel, Taken 2, mined much the same ground although it varied things just enough that the rescued daughter (Maggie Grace) now helps dad find their missing mom Lenore (Famke Janssen). Enough seemed to be enough and Neeson thought a third chapter was out of the question. 20th Century-Fox thought otherwise and asked Neeson and cowriter Robert Mark Kamen for one more. We were told things would go in another direction but I doubt anyone anticipated it going even lower, down the rabbit hole as it were.

Taken 3, out now on home video from 20th Century Home Entertainment, has Neeson’s rep held hostage and he has to spend nearly two hours trying to reclaim his good name or be arrested for seemingly killing his ex-wife. Of course he didn’t do it and he has to figure out who killed her and why pin it on him? As a result, we have the usual set pieces, the action chases and action fights that keep good stunt people employed. Olivier Megaton is back for his second consecutive turn behind the camera but like the script, brings nothing new to the table. Everything looks swell and blows up just fine but everything about the production feels worn out. Thankfully, the negative criticism and weak box office means Maggie Grace’s newborn baby at the film’s end will be safe from a sequel.

About the best that can be said of this production is that Besson and Kamen knew it needed something more and they tried to actually develop the characters somewhat but it was far too little and way too late.

The Blu-ray transfer is perfectly fine without much to complain about so is swell to look at and the lossless DTS-HD Master Audio 5.1 sound is a solid match.

The Special Features feel just as worn as the feature. The best may be the unrated, extended version that adds about seven minutes of mayhem but you’d be hard pressed to identify those minutes.