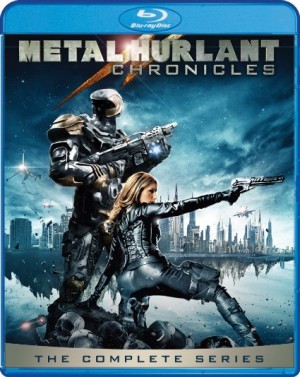 This spring, let your imagination run free. Sci-fi fantasy and comic book fans will have the chance to embark on a unique journey beyond space, time and known worlds that await us when the highly celebrated live-action, sci-fi anthology METAL HURLANT CHRONICLES: THE COMPLETE SERIES debuts for the first time on Blu-ray™ and DVD on April 14, 2015 from Shout! Factory.  This highly anticipated home entertainment collection will be available at Walmart stores nationwide and at Amazon.com

The last fragment of a living planet, reduced to dust by the destructive madness of its habitants, is condemned to roam the universe for eternity, bringing suffering and deception to those who cross her path. That damned messenger is called: The Metal Hurlant.  From 1960s cold war drama to distant future, fantasy to medieval, the live action sci-fi series METAL HURLANT CHRONICLES spans a wide range of self-contained stories linked together by an asteroid, called the METAL HURLANT, which passes close to the planet where each story is taking place, thereby changing the outcome.