One could argue that Moses is the most significant and influential character from the Old Testament. After all, he led the Hebrew out of slavery and delivered the Ten Commandments. His birth story proved influential, notably to Jerry Siegel a few thousand years later. As embodied by Charlton Heston, there was never a mightier figure which is why it has taken until 2014 before anyone attempted a modern day retelling of his story.

Ridley Scott brought all his filmmaker skills to Exodus: Gods and Kings and the movie is a visually sumptuous. The Middle East provides a nice visual backdrop to this story and the movie deserves to be seen on the large screen. Watching the Digital HD version on my computer screen, courtesy of 20th Century Home Entertainment, shows the limitations of epics on any home screen. There is so much detail and scope that deserve the silver screen so the home version blunts its impact.

Scott was roundly criticized for his casting white folk in the lead roles but commercial considerations made any other choice untenable. With that said, he chose well with Christian Bale as Moses, paired opposite Joel Edgerton as his adoptive brother Ramesses II. Yes, more racially accurate people should have been cast from there on down but this is an argument you’re not going to win so let’s move on.

I wish the movie was so deft. The film’s pacing is one of its largest problems. We dwell on a battle with the Hittites at the beginning that has little bearing on the rest of the story and should have been trimmed so we could get on with things. As it is, there are long, drawn out scenes where very little of note happens or gets said. Then, when we get to the 10 plagues, we only see a few of them, when we wanted each and every one. That said, when the plagues arrive, we do get a far better sense of how each decimated the Egyptian people, weakening Ramses’ resolve to keep the Jews in his grasp. 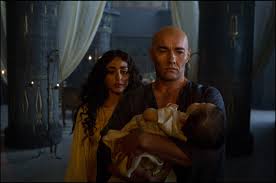 Which brings us to another issue of contention which are the biblical and historical inaccuracies. While Ramesses II is likely the unnamed Pharaoh in the Exodus story of the Bible, the pyramids the Jews are seen building were completed centuries earlier. What were they building? Hard to say but certainly the pyramid for Seti I (John Turturro) since these resting places tended to take over a decade to complete. Moses’ divine power to turn a staff into a snake is absent as is his stutter – he’s downright eloquent at times.

There are some very interesting character dynamics that are begging to be better explored. First, there’s Moses being raised by Seti after his daughter and his even-handed treatment from Seti, much to Ramesses displeasure. Then you have Moses and his long-lost brother Aaron (Andrew Tarbet) or his wife Zipporah (Maria Valverde). But the chief dialogue is between Moses and God, in the form of a young boy named Malak (Isaac Andrews), who is at least seen next the Burning Bush. Malak seems unhappy with Moses’ performance and attitude but sticks with his chosen avatar and there’s no reason given. Why Moses? Why let the Jews suffer for years while Moses goes into exile, marries, and raises a son of his own? Nope, no one questions this, just somberly accepts their fate.

The film overall is somber and dreary, lacking in the spark of life. There’s little sense of joy in the palace or the caves or the huts or the desert. There’s a distinct lack of humor in the tale, which may be true in the Bible, but here, we had a chance to bring more life to the players.

Instead, we get a visually feast beginning with the arrival of the plagues right through the parting of the Reed Sea (wherever that was). Here, Scott easily outdoes Cecil B. DeMile and brings us a parting worthy of the moment’s spectacle.

The 2:30 film has a very nice transfer and plays smoothly. The colors are rich and the sound, through standard computer speakers, was acceptable.

The Digital HD comes complete with the bonus features, which features Scott’s Commentary. There also The Lawgivers’s Legacy (23:14), where academics extol the facts and suppositions surrounding whether or not there was a real Moses and if so, when did he operate and whom did he oppose. There are nine Deleted Scenes (14:37), the most valuable one being Moses coming down from the mountain to find his people worshipping the Golden Calf. Additionally, there are fourteen BTS Enhancement Pods (48:13) covering each major aspect of mounting a production of this nature. Finally, there are The Gods & Kings Archives split between Pre-production, Production and Post-Production stills, sketches, artwork, and design.