All things come to an end and the true death arrived for HBO’s True Blood earlier this year. This week, HBO Home Entertainment offers up The Complete Seventh Season along with a mammoth complete series box set. In looking back on the series, it probably hung around a little longer than necessary, especially as things spiraled from over-the-top to insane crazy after series creator Alan Ball left.

The seventy episodes veered further and further from Charlaine Harris’s The Southern Vampire Mysteries novels and even she wrapped up her prose stories recognizing the time had come.

Bon Temps is under attack as things open up, picking up where season six dropped us. The Hep V Vampires are running amuck as many of our favorite supporting characters have been threatened. Pam continues her hunt for Eric leaving Sookie as the calming voice of reason and she’s not feeling all that steady. Meantime, Bill is on his own and every scene brings us closer to the end of his arc and there’s a sense of inevitable melancholy from the beginning.

His arc is the only one that gets the right amount of time to resolve. While things ratchet up in intensity, we watch one familiar face after another die in vastly imaginative ways. But it also brings several sub-plots to hasty or abrupt conclusions. Luke Grimes, who played James, walked away when he was unhappy with his story and was replaced with Australian actor Nathan Parsons, who is fine. The uneven pacing also serves to winnow down the cast for the final two episodes when the main figures take center stage. As usual, poor Tara gets the worst treatment as if the writers could never get a handle on her after the first brilliant season. Alcide’s departure barely gets noticed.

On the other, it’s nice to have Hoyt back and reaching a satisfying 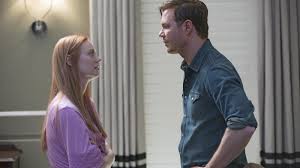 conclusion with Jessica so it isn’t all gruesome. With Jessica back in Hoy’t sarms, Jason needed someone to love – as befit his character from the first episode. However, how quickly he found it with Bridget and received Sookie’s blessing came way too fast for my taste.

And then we’re down to Bill, Eric, and Sookie the enduring triangle that was twisted like so much Silly Putty across the years. Is it entirely a happy or unhappy ending? Your call but it does wrap things up in a tidy package which is fine. The show grew more and more uneven through the seasons so this was about as good a wrap-up as one can expect. (And there’s a lovely cameo of novelist Charlaine Harris in the final episode, her way of saying bye-bye.)

As we have come to expect, the three disc set comes packed with the usual assortment of special features starting with audio commentaries for five of the ten episodes. Directors Howard Deutch, Gregg Fienberg, Angela Robinson, and, Simon Jayes; screenwriters Kate Barnow, Daniel Kenneth, Craig Chester, and Brian Buckner; and actors Kristen Bauer van Straten, Carrie Preston, Lauren Bowles, Chris Bauer, Anna Paquin and Stephen Moyer all weigh in on the stories. It’s nice to hear from Paquin and Moyer in the final episode since they carried the emotional load and saying farewell to the show they fell in love with (along with one another).

There’s the fifteen minute True Death: The Final Days On Set, an informal look as the cast and crew wind up their work. Then there’s True Blood: A Farewell To Bon Temps, a twenty-eight minute retrospective that explores the attraction of vampires with Ball, Buckner, and the main cast offering their well-earned observations on that and other aspects of making the series. An updated True Blood Lines timeline is offered once again along with the previews and recaps.