Dawn of the Planet of the Apes Rises for the Holidays 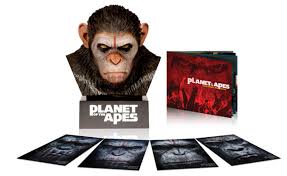 LOS ANGELES, Calif. (September 30, 2014) – Get ready for worlds to collide like never before! Twentieth Century Fox Home Entertainment takes you to the center of the battle between apes and humans with DAWN OF THE PLANET OF THE APES 3D Blu-ray™, Blu-ray™ and DVD on December 2 and on Digital HD™ November 11. The film quickly became the highest grossing film in the franchise, netting nearly $680 million at the box office*, and the most critically acclaimed blockbuster of the summer**.

Gary Oldman, Andy Serkis, Jason Clarke and Keri Russell star in this thrilling next chapter of The Planet of the Apes. It is 2026, and humanity has been pushed to near extinction by a deadly virus. When a group of survivors desperate to find a new source of power travel into the woods near San Francisco, they discover a highly evolved community of intelligent apes led by Caesar (Andy Serkis).  The two species form a fragile peace but dissention grows and the groups find themselves hurtling toward all-out war.  Fans and critics flocked to the film, with The Hollywood Reporter raving that “In the annals of sequels, Dawn is to Rise of the Planet of the Apes what The Empire Strikes Back was to Star Wars—it’s that much better.“

With approximately two hours of special features, the DAWN OF THE PLANET OF THE APES Blu-ray will make a perfect holiday gift for any action film fans. The Blu-ray is jam-packed with behind-the-scenes footage and deleted scenes, including intimate interviews with Andy Serkis on how he masterfully created Caesar and inside looks at the secrets of the relationship between man and apes.

For an even more immersive experience in the world of the apes, fans have to get the Planet of the Apes: Caesar’s Warrior Collection. Witness the battle for world domination between ape and man with both Rise of the Planet of the Apes and Dawn of the Planet of the Apes on Blu-ray and Digital HD™ on December 2. The collection comes in a limited-edition, fiercely lifelike replica bust of Caesar wearing his tribal war paint, designed by WETA, the special effects masters responsible for bringing Caesar to life on film. This must-own set includes an all-new 32-page booklet “Planet of the Apes: Building an Icon” that explores WETA’s creation of the Caesar replica, four battle-ready ape collectible character cards and more than 5 hours of special features.