Are We at Peak Superhero? 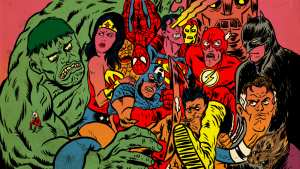 Mark Harris at Grantland points out that we might be hitting the mass media equivalent of the 90’s comic glut:

Even as they dominate the box office, comic-book movies are approaching a moment fraught with peril. If one definition of a bubble is that everybody with an investment to protect insists that it isn’t a bubble, then we should probably take as a warning the breezy assertion of Marvel’s chief creative officer, Joe Quesada, that “We’re not the Western … The sky’s really the limit for us, as long as we as a collective industry continue to produce great material.” But let’s give him the benefit of the doubt and try out a more specific definition: A bubble reaches its maximum pre-pop circumference when the manufacturers of a product double down even as trouble spots begin to appear.

That, I would argue, is what has happened in the last month, in both movies and television.

via Are We at Peak Superhero?

There’s a reason why we called our category for media versions of comics “Every Comic Eventually Gets Adapted”.