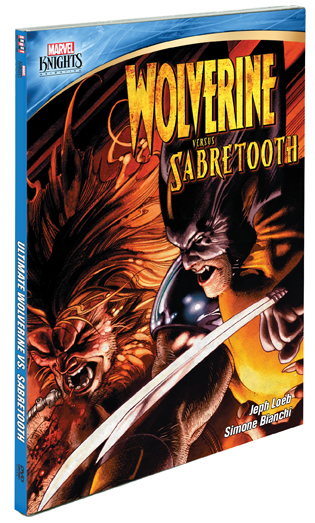 At the start of the New Year, Marvel fans are invited to witness one of the most ferocious battles in the Marvel Universe. The superstar team of writer and Executive Producer Jeph Loeb (Marvel’s Agents of S.H.I.E.L.D.) and Artist Simone Bianchi (Astonishing X-Men) team up to deliver the thrilling comic book action adventure WOLVERINE VS. SABRETOOTH. This pulse-pounding story captures the biggest rivalry of the Marvel Universe in Marvel Knights Animation’s WOLVERINE VS. SABRETOOTH DVD, debuting for the first time on home entertainment shelves nationwide on January 14, 2014 from Shout! Factory.

An exclusive behind-the-scenes bonus content feature provides an intimate and retrospective look at the development and production process of this amazing story. Marvel Knights Animation remains true to the heritage of panel-by-panel graphic storytelling, boasting groundbreaking illustrations, sensational soundscapes, and of course, the explosiveness of the mighty Marvel universe. Behind every image and every word lies the genius of Marvel’s celebrated creators.

Superstars Jeph Loeb (TV’s Marvel’s Agents of S.H.I.E.L.D.) and Simone Bianchi (Astonishing X-Men) team up for the biggest, best and, quite possibly, last battle between Wolverine and Sabretooth! These sworn foes have been locked in an endless grudge match that goes back longer than either can remember – or even imagine. The key to victory is eons old, and it’s certain to rock their world. Think you’ve seen Marvel’s fiercest go toe-to-toe before? Those were just warm-ups!