Like most people, I enjoyed the heck out of Iron Man 3; it was fast, loud, noisy, and things blew up really well. The handoff from Jon Favreau to Shane Black was a step in the right direction and the casting was superb.

The movie, out now from Paramount Home Video, is definitely a sequel to The Avengers and not Iron Man 2, which everyone now seems to have declared a misfire. Clearly, the United States government has backed off demanding the armor now that they owe him their lives. It didn’t hurt that he allowed Jim Rhodes to keep the War Machine armor for America’s use.

Having Tony Stark deal with the aftermath of nearly dying while trying to end an alien invasion gave the film a nice weight, allowing us to explore the character from a new perspective. The metaphor of his anxiety and the malfunctioning Mark 42 armor was nicely handled without being heavy-handed. This was definitely a Tony Stark movie and Robert Downey Jr. nailed it. We saw his cockiness, insecurities and sheer brilliance, but all the same person.

While Stark is tinkering on armor after armor to combat his sleepless nights, a global terrorist named the Mandarin (Ben Kingsley) has reared his head, hijacking the airwaves and demonstrating a cold-blooded approach. He keeps promising the President of the United States (William Sadler) a lesson and Black’s script gets fuzzy about what it is the Mandarin wants. 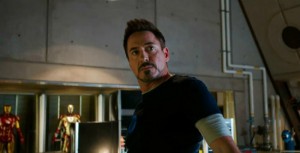 Meanwhile, Aldrich Killian (Guy Pearce) arrives at Stark Industries seeking something and again, what he wants is unclear but Pepper Potts nicely turns him down. As we have already learned, Killian has cleaned up nicely since his 1999 encounter with Stark when he first explained his desire to form a company called Advanced Idea Mechanics. In between, he wound up partnering with Maya Hansen (Rebecca Hall), the brilliant scientist Stark blew Killian off to bed. The two have wound up creating a bio-repair formula dubbed Extremis that not only can repair injuries but somehow superheats the body. Early experiments resulted in subjects going boom but Killian and his flunky Savin (James Badge Dale), and others have mastered it, becoming superhuman engines of destruction.

Now that we have all the elements in place, Black stirs the pot and things happen. Unfortunately, they don’t all blend terribly well so you have the richness of Stark’s dilemma but Hansen’s fall from grace is half-baked at best, a disappointment and waste. As much as the film is a joy to watch, I came away thinking it could have been better had everyone but Tony Stark been given more to do.

Pepper has no character arc this time around. She loves Tony, is frustrated by him, and becomes a damsel in distress, looking great all the while. But, she’s given no time to actually reflect on what happens to her in the final act and how that colors her view of the world that has changed around her. I also missed the wit of the exchanges between them that came from Joss Whedon’s pen. Here, it was perfunctory. Same with Rhodes. There’s a nice running gag about War Machine being renamed Iron Patriot but he just flies around and banters with Tony. The President and Vice President (Miguel Ferrer) should have had more to do than be chess pieces Black rapidly moves around the board.

Speaking of rapid, the ease with which the armors attach and detach themselves to Stark (and others) strained credulity throughout the film. When all the armors arrive for the fiery climax, they are readily shredded making on wonder if they are attached with Velcro. There’s been a steady increase in speed with which the suits of armor can come on and off, which is to be expected, but this has gone too far, too fast.

As for those who will complain about the radical reinterpretation of The Mandarin from his comic book past – I sympathize. But even when he was introduced in the early 1960s he was already a bit of an anachronistic foe. Frankly, this was the best way he could have been used without inviting commentary about it being a racist gesture, angering their Chinese co-producers. And by casting Ben Kingsley, you couldn’t have asked for a more perfect choice. He steals every scene he’s in.

The film kicks off Marvel Cinema Universe Phase 3 but does nothing obvious to continue the threads we saw at the end of Phase 2, the threat from Thanos. The closest we come is seeing that time has passed and Tony is still hanging around with Dr. Banner. I’ll be curious which film really propels us towards 2015′s Avengers 2. Despite the total absence of SHIELD in the film, the world is richer with the addition of AIM and Roxxon, elements we will no doubt be seeing on film — and television — in the future.

As for the video edition, it comes in the usual assortment of packages so decide which combo pack works best for you, including those who think 3-D TV is the future. My standard Blu-ay disc looked fabulous, with sharp detail and rich colors. I’m not sure it will get better than this, aided by stellar sound. The DTS-HD Master Audio 7.1 surround track lets you hear every engine roar through the skies.

Thankfully, you won’t have to scurry from store to store to secure all the bonus content but what there is leaves you wanting more (which will make you wait for the Phase 2 box set sometime in 2015 or 2016).

Black and co-writer Drew Pearce provide some interesting color commentary showing how much thought went into structuring the film given all that has come before it. You do get a fairly standard Restore the Database Second Screen Experience assuming you want to download the Jarvis app and locate the content (which is becoming as annoying as the AR moments embedded in the comics).

Additionally, there is Iron Man 3 Unmasked (11 minutes), a routine behind-the-scenes featurette that should have been far longer and more detailed. Instead, they give us Deconstructing the Scene: Attack on Air Force One (9 minutes), showing how much was real versus CGI, which is impressive these days. There are also Deleted and Extended Scenes (16 minutes) which is interesting, entertaining, and mostly thankfully not in the final product. As one would expect, anything with Downey in it means the Gag Reel (5 minutes) is funnier than usual although Cheadle nearly steals this featurette. And in case you missed that Thor: The Dark World is arriving in November; you get a two minute sneak peek.

The bonus highlight is Marvel One-Shot: Agent Carter (15 minutes), focusing on Peggy Carter, Captain America’s paramour from his first feature. Hayley Atwell is back in the title role (now rumored to being considered for a television series), joined by the always entertaining Bradley Whitford, and the return of Dominic Cooper as Howard Stark. She runs, jumps, kicks ass and we love it.