Davis Saunders hosted the Walter Baumhofer: King of the Pulps panel at the 2013 PulpFest convention, spotlighting the artist’s life and career. The panel was recorded by The Book Cave’s Art Sippo.

About Walter Baumhofer: King of the Pulps:
Adventure35-08-15Who was the “King of the Pulps?” Some say it was H. Bedford Jones, while others claim the title for Frederick Faust, better known as Max Brand. But to the young readers who devoured the pulp magazines and “delighted in his four-color depictions of action and adventure,” the one and only “King of the Pulps” was Walter M. Baumhofer. 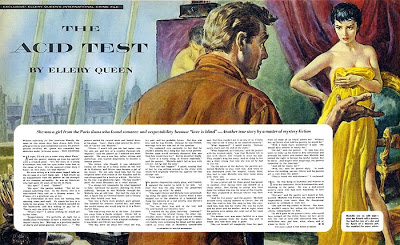 When an injury at age fourteen left him unable to perform manual labor, Baumhofer began to intently study art. A scholarship allowed him to attend the prestigious Pratt Institute where he was able to study under Dean Cornwell and H. Winfield Scott. While still a student, he began his art career drawing pen and ink story illustrations for Adventure Magazine. By 1926, he was contributing covers to Clayton Publications and, soon thereafter, to Harold Hersey’s line of pulps. Street & Smith signed him to a contract in 1932 to paint a cover each week for their pulps. Around the same time, he was sought out by Popular Publications to provide cover art for their line of magazines, and so began his reign as the “King of the Pulps.”

Baumhofer labored for the pulp market for just over a decade, painting about 550 covers for a wide variety of titles including Ace High, Adventure, Detective Tales, Dime Mystery Magazine,

Doc Savage, Fire Fighters, Gangland Stories, The Spider, Spy Stories, Western Story Magazine, and others. He moved into the slick market and advertising art in the late thirties, contributing work to American Weekly, Collier’s, Cosmopolitan, Esquire, Redbook, Women’s Day, and other magazines. In later years, his paintings graced the covers of Argosy, Outdoor Life, and Sports Afield and his portrait, landscape, and Western art were exhibited in fine art galleries nationwide.

At 9:30 PM on Friday, July 26th, David Saunders presented a biographical profile of Walter Baumhofer’s life story as well as the artist’s fascinating family history. He exhibited never-before-seen visual documents from the personal world of this pulp art master.  Walter was a close friend of the presenter’s father, Norman Saunders, and as such David was personally acquainted with the artist for over thirty years. Baumhofer was a

sensationally colorful character and David Saunders looks forward to sharing many amusing anecdotes and incidents that will help to promote a greater awareness of this legendary artist.