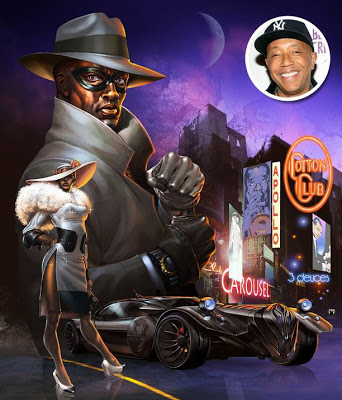 Music and fashion mogul Russell Simmons announced in an interview with Entertainment Weekly that The Harlem Shadow, a new animated online superhero series that will be set in the Jazz Age, will be revealed at the New York Comic-Con in October. The Harlem Shadow will feature hip-hop star Common (currently seen in AMC’s Hell on Wheels) in the title voice role and is executive produced by David Uslan.

After the NYCC debut in October, look for The Harlem Shadow content will be online by the end of the year at All Def Digital, the YouTube channel from Simmons and Awesomeness TV’s Brian Robbins.

The Harlem Shadow is an adaptation of the indie small-press series of the same name from RavenHammer Comics and the creative team of Brian Williams and Christian Colbert.

About the comic book:
THE HARLEM SHADOW
BIRTH OF THE COOL

Born at the tail end of the Harlem Renaissance, The Harlem Shadow is the first official Black paranormal crime-fighter that hit the streets of New York around 1929-1930. He was known for his scary appearance, his vicious hand to hand

combat skills and his mastery of two lethal revolvers, used to maim and disarm his enemies but never kill. In 1950 as a result of the Black Mask Act…Harlem Shadow was hunted down by New York City Police, lynch mob style, and unmasked. His name was Linden Somerset, a school teacher and librarian, and he served a twenty year jail sentence at Alcatraz Island. This is his story.

You can read the entire EW interview here.