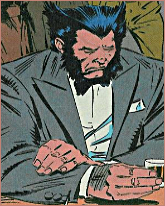 I wasn’t wearing a tie last Friday when Mari and I hied ourselves up the road to the monsterplex to watch the movie du jour, The Wolverine. Nothing unusual there; to the best of my recollection, I’ve worn ties exactly twice in the last quarter century. The first such occasion was at my wedding, a bow to the mores of the tribe that spawned me. The second was when I accompanied Jenette Kahn, at the time my boss, to meet some guy from the United Nations at one of those hoity-toity Manhattan restaurants that don’t permit entry to gentlemen un-tied, and while they’re at it, the gents had best be wearing suits too – or at least jackets. These are classy joints. They don’t let just anyone in. To chow down at one of them, you have to be of the elite, or at least prosperous enough to buy a strip of cloth to hang down the front of your shirt.

They’re signifiers of distinction, of class, neckties are, and as such they’re akin to a clergyman’s vestments, a soldier’s uniform, a detective’s badge, the rented tuxedo I once wore to a prom…feel free to add your own examples. I’ll add one more of my own: superhero costumes.

Odd clothing has been a defining feature of superhero stories ever since that warm Cleveland morning when a teenaged artist named Joe Shuster made the first Superman sketch. This was almost certainly done at the behest of Superman’s co-creator, another Cleveland teen, Jerry Siegel. Why the funny suit? Well, Jerry and Joe were big science fiction fans and were probably influenced by the futuristic garments worn by the characters in the illustrations that were prominent in the pulp magazines – at the time, sci fi’s main venue. Circus costumes may have been another influence.

Whatever Jerry and Joe’s reasons for costuming their brainchild, it was a good idea. It was attention-getting, it marked Supes as something special, it was ideally suited to the iconic quality of the medium that eventually gave him a home, comic books. Consider it an unwritten rule: you want a superhero, bring on the costume.

But Wolverine is most surely a superhero and there he was on the big screen, embodied by Hugh Jackman who was wearing, not a costume, but duds you might buy at a sporting goods store. In so doing, he was nudging superherodom a tiny bit closer to what we will jocularly refer to as real life, and not the fantasyland versions of Mother Earth that have been superheroes’ usual domains. This is an aspect of the genre’s evolution and we’ll have to see if it becomes permanent. If it does stay, writing jobs may be get a bit simpler; storytellers won’t have to give their superdoers a pause to change clothes before dealing with the latest humungous crisis. (Lois, could you fall a little slower?…can’t get the cape to hang right…) But some quirky charm may be lost.

Time will tell. It always does.

NOTE: All allusions to “morning” and “afternoon” are EDT USA.