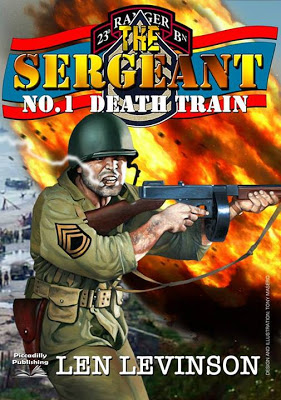 Piccadilly Publishing has added Gordon Davis’ The Sergeant to their ebook reprint catalog.

I’m delighted to announce that we have acquired the ebook rights to one of the great series of the 1980s — THE SERGEANT by Gordon Davis. Beginning in October we’ll be issuing all nine books in the series, this time under the author’s real name, and all featuring covers painted by Tony Masero!

About Piccadilly Publishing:
Piccadilly Publishing is the brainchild of longtime Western fans and Amazon Kindle Number One bestselling Western writers Mike Stotter and David Whitehead (a.k.a. Ben Bridges). The company intends to bring back into ‘e-print’ some of the most popular and best-loved Western and action-adventure series fiction of the last forty years.

Series fiction (the most popular genre was always the Western, but it also encompassed war stories, tales of pillaging Vikings, life in the Roman arena and action-adventure set in the far-flung future) was at its most popular throughout the 1970s and 80s and is still fondly remembered and avidly collected by die-hard fans even today. Some books are now so hard to come by that it’s not unusual for them to change hands for astronomical amounts.

“We got to know a number of the authors when we were teenagers,” remembers Mike. “Although they mostly wrote Westerns, they often joked that they had never been further west than Piccadilly, in London’s West End.”

Thus Piccadilly Publishing was born. One of its aims is to bring back titles for new and old readers alike. Great care is taken over the production of each title, and each one has a specially-commissioned cover from Westworld Designs that recreates the feel of the originals, at the same time giving them a fresh and more modern look.

At the moment all Piccadilly Publishing titles are available for download from Amazon’s platforms in the UK, US, Spain, France, Germany and Italy, with more titles are set to follow on a regular basis. There are also plans to expand their availability on other electronic platforms.

“We’re adding authors and series to our catalogue almost every day,” reports Whitehead. “Over the coming years I think we’ll surprise and delight our fellow fans with what we have to offer.”