Downey Signed for Avengers 2-3 — What Happens Next?

To the surprise of few, Marvel announced on their website today that Robert Downey, Jr. would don the armor at least two more times. What’s interesting is that the two films he signed for are Avengers 2 and Avengers 3, the latter of which has yet to be given a formal green-light or spot on the Disney release schedule.

Downey has been handsomely rewarded for his early participation in the Marvel film universe, earning a reported $50 million for his work in the first Avengers film in addition to his salary from the first three Iron Man movies.

As the Marvel Film Universe continues, Phase 2 is well mapped out and with the claiming of two weekends in 2016 and 2017; Disney is clearly staking their territory for Phase 3. Speculation abounds as to what Phase 3 will be comprised of but with today’s announcement, it is increasingly clear the solo Iron Man series are done for now. Instead, other characters will fill the void with projected second sequels to Captain America, Thor, and one for Guardians of the Galaxy leading the way. Should Edgar Wright’s Ant Man succeed, that too would spawn a sequel. Meantime, an armload of other heroes and heroines are being eyed for the Big Screen. 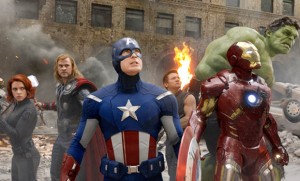 At present, Marvel has not announced if Black Panther, Doctor Strange, The Inhumans, or Heroes for Hire are being seriously developed or merely teased. No one saw Guardians coming so the possibilities are really limitless.

Add into the mix the recently returned rights to films featuring Blade, Ghost Rider, and Daredevil and Marvel has an embarrassment of riches. All of which leads one to wonder when the saturation point will be felt. That could come as early as next summer when four Marvel films from three studios are released in four months, starting with April’s Captain America: The Winter Solider leading the way, followed by The Amazing Spider-Man 2, X-Men: Days of Future Past, and Guardians. Sony has also just announced third and fourth installments of the current Spider-Man series of films with several plot threads added in the second film.

It has been speculated that Marvel’s Agents of SHIELD television series may be used as a launching pad for new film properties or television series. While the CW’s Smallville trotted out numerous spin-off possibilities from Aquaman to Booster Gold, none of them succeeded and there’s no guarantee Marvel will be any more successful, even with Joss Whedon’s intimate involvement.

DC Entertainment has finally succeeded with getting their cinematic universe off the ground with the smash success of Man of Steel. While its sequel is being fast-tracked for, most likely, a 2015 release, they’ll be playing catch-up well into the 2020s. By then, though, audiences may have been super-heroed out reminding one that Denny O’Neil always described them as “DC Misses the Boat Comics”.