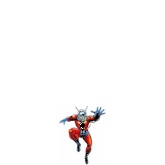 Obviously, the honchos at the multi-media behemoth that Marvel Comics has become don’t agree with Mr. Newman’s lyricized sentiment. There was an item on Yahoo’s news site that told all of us who care about such information that Mighty Marvel is planning an Ant-Man movie.

Well, this could be a real creative challenge, because Ant Man was never what you’d consider a game-changing creation. His superpower was…he could shrink, like a cheat suit. But he did retain the strength he had as a full-size dude. Okay, that doesn’t seem like a trope that would suggest myriad storylines and that may be one of the reasons that the original Ant Man didn’t last too long, at least not as Ant Man. After sharing one of Marvel’s Tales to Astonish with the Hulk for a bit, Ant-Man switched personae and became Giant Man, who later called himself Goliath. He was big.

The little-guy-with-big-muscles idea wasn’t originated by Ant-Man’s creative team, Stan Lee and Jack Kirby. Marvel’s rival, DC, had several heroes who were known, individually, as The Atom. The first, who trod DC’s pages way back in 1940, was Al Pratt and he didn’t change size. He was just not very large, but, boy, was he tough! The second of DC’s Atoms, brought to life during Julius Schwartz’s wholesale reinvention of DC’s superhero pantheon, was Ray Palmer, a scientist whose futzing with some white dwarf star stuff that somehow landed on Earth enabled him to shrink while retaining his molecular mass, a stunt he apparently shared with Ant-Man. (This, by the way,explains what happens to the mass that’s apparently lost in the shrinkage. It doesn’t go anywhere, it just gets more dense. You science lovers satisfied now?)

There have been several additional versions of both Ant-Man and the Atom since the originals moved on. But I’m a silver age guy so I’ll ignore them. (And if any of them don’t like it, they can just go get shrunk.)

Back to the movie. The film makers told a convention audience that, though the flick will have humor, it won’t be a spoof. And that causes me to want to see it. The other superhero entertainments, past and present, delivered what we expected. Some of them delivered it extraordinarily well, but they didn’t stray too far from the basic good guy’s-powers-defeat-bad-guy’s powers structure, nor should they. But Ant-Man might prompt a different approach – present a challenge to which the film guys can rise. Watching them do that might be worth a trip to the multiplex.

RECOMMENDED READING: (You thought we were done with Iron Man? Not quite, Bucko.) Inventing Iron Man, by E. Paul Zehr and Warren Ellis.