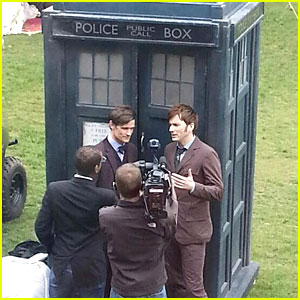 In a absence of fact, rumor and Clever Theories rush in to fill the vacuum.  And considering the security surrounding The 50th anniversary Doctor Who adventure, and the ravenous hunger of the public for details, there’s no doubt the media is falling over itself to deliver any snippet it can, real or imagined.

So far the actual facts are few and far between.

It will be broadcast in 3-D Whether or not there will be any cinematic presentations in that format is unkown, but wouldn’t be a bad idea.

We know of only one other Doctor who will appear – namely David Tennant, with Billie Piper returning as Rose Tyler.  No news on from what point of his history this even will take place, however, though based on their costuming, it’s a fair bet Tennant is playing the proper Doctor and not “Doctor Two”, the one from Pete’s world.

The Zygons are back – publicity photos confirm this. However, Robert Banks Stewart, writer of Terror of the Zygons (not to mention The Seeds of Doom), confirmed he gave permission to use the baddies, and claims in this interview that the Daleks and Cybermen will appear as well.  His data source is suspect, and none of either baddie have been sighted on location.

Jemma Redgrave will be back as Kate Stewart, the new head of UNIT.  Other guest stars include John Hurt and Joanna Page, “Stacey” from Gavin and Stacey, in which James Corden was Gavin.

Christopher Eccleston will not appear – He’s stated, and the BBC has confirmed that while he talked to Moffat about a return to the series, he has chosen against it.  Now there’s every possibility that’s a clever lie, intended to keep a surprise a secret. But one must know when to fish, and when to cut bait, so considering Eccleston’s reticence to stay with Who any longer than he did, it’s fairly safe to presume this is the truth.

None of the earlier Doctors will be back either – Colin Baker, Paul McGann and Sylvester McCoy all confirmed at a convention in New Zealand that none of them had been approached.  McGann still help out hope for a last-minute call, commenting he was used to being called on Wednesday for a part that began on Thursday.  But one thinkg they all agree on is that Lord of the Rings auteur Peter Jackson would make a stellar Who director.  Jackson whimsically commented in earlier interviews that he’d love to do an episode, even refusing payment, saying he’d accept a Dalek in lieu of a check.  While I’m sure the BBC would love to have this happen, but there’s certainly nothing in the cards

Those are the facts at hand.  Everything from this point on is merely the reportage of various rumors, dreams and outright cockeyed flumdummery from the media.

The roles Hurt and Page are playing are unknown, but theories abound.  Based on her costume at the various location shootings, some believe Page may be playing Queen Elizabeth the first, a character who has been alluded to in past episodes, most notoriously when The Doctor implied that her sobriquet of The Virgin Queen was not  (any longer) the case.

John Hurt’s role is unknown as well, but the fans are ready with a clever theory.  There are those who suggest that he is a new incarnation of The Doctor, having taken place between McGann’s and Eccleton’s.  This is possibly sprouting from this picture of John Hurt from the filmnig, wearing an outfit somewhat reminiscent of both actors’ costumes.  Whatever he’s playing, he’s dedicated to the part – he left early from a party in his honor over the weekend to ensure he made first call in Cardiff the next day

The past Doctors may appear virtually – The latest rumor bouncing about is that Doctor Who may take a page from Star trek, specifically Deep Space Nine’s adventure Trials and Tribbleations.  The UK’s Daily Star (not exactly a paper of record, but still) reports that the BBC may be planning to digitally insert matt Smith into episodes from past Doctors’ eras in the same way they inserted the DS9 cast onto Space Station K-7 in The Trouble With Tribbles.  This wouldn’t be the first time they did something similar – Matt appeared dancing with Laurel and Hardy on Amy and Rory’s TV in The Impossible Astronaut, which may well be where the rumor got its start.

The BBC are keeping as tight a lid on the details of the episode as possible for obvious reasons. Matt Smith has reported it’s a wonderful story, but shared no details.  On Jonathan Ross, David Tennant suggested “paintings” may be involved in the story in some way.

As a rule, one must use the first rule of the internet when analyzing the various “news” you will hear over the next few months – “Pictures, or it didn’t happen.”