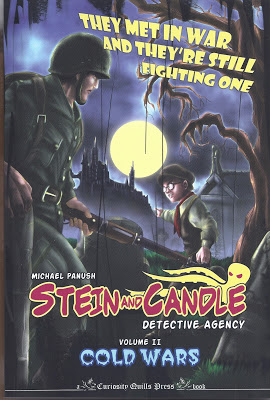 One of the most enjoyable aspects of New Pulp Fiction has been the creation of memorable new heroes by today’s pre-eminent pulp writers.   Derrick Ferguson has given us Dillon and Mongrel to name a few.  Barry Reese has created a bunch of awesome characters, the most recognizable being the Rook and Lazarus Gray. And the list goes on and on.  Which is why this reviewer has become so enamored with Michael Panush’s series, STEIN AND CANDLE : Detective Agency which features two of the most original new pulp heroes ever to grace a page of purple prose.
Mort Candle is an ex-Army sergeant tough-guy private eye who is parts Sam Spade and Mike Hammer.  Candle’s fist often speak louder than his words.  His partner is a teenage boy named Weatherby Stein, a German youth whose parents were killed by the Nazis.  Weatherby’s father was one of the world’s leading authorities on the occult and Weatherby was raised studying arcane lore thus making him, even at a young age, an expert in the dark arts.  Thus this duo travels the post World War II globe tackling all manner of bizarre adventures.  This is the second volume of their cases and like the first is jammed packed with memorable scenes that assure Stein and Candle a reserved niche in the halls of New Pulp Fiction heroes.
“Tiki Terror,” has the guys flying to Honolulu, Hawaii to solve a bizarre murder of a hotel magnate who was apparently eaten by sharks in his high-rise office far from the sea. While on the island, Weatherby is reunited with his older sister, Selena, a college student studying anthropology.
“Crimson Catch” takes our duo to the mysterious New England fishing town of Innsmouth where they cross paths with Lovecraft monsters from the deep.  Panush audaciously swipes the plot from “A Fist Full of Dollars,” having Candle play the part of the instigator pitting two occult clans of fishmen against each other.
With “Mort Candle’s War,” Panush continues the origin saga began in the first volume returning back to the Black Forest where Sgt. Mort Candle and his squad of Screaming Eagles fight a desperate battle to save young Weatherby Stein and deliver safely to General Patton’s Third Army.  Great combat sequences reminiscent of DC Comic’s old Sgt.Rock series.
In “Pharoah’s Palace,” Mort and Weatherby uncover an ancient Egyptian mystic operating a casino on Los Vegas and team up with legendary hero, Doc Dearborn and his daughter, Evelyn, to combat this ancient evil.
The fifth tale is called “The Hallow,” and has our heroes visiting rural Appalachia to rescue a miner’s daughter kidnapped by a coven of witches.  But before they can formulate an effective strategy, the witches snatch Weatherby and its left to Mort to rescue his young partner with the aid of a con artist turned preacher man.
“Business Proposition,” picks up on the episodic origin story of how the gruff former army sergeant and the special trained teenager hook up again in Brooklyn after the war and what leads them to form their partnerships as detectives who specialize in the bizarre. Easily our favorite tale in this collection.
Finally the book wraps with “Crypt Chasers,” a high-balling confrontation between Weatherby and malevolent distant relative who has returned from the dead and plans on unleashing his particular brand of sadism on the modern world.  Panush leaves the story open ended, having created what looks to be a recurring arch-enemy for our duo.  Making us all the more anxious to dig into the next volume of this terrific series.
We’d also like to applaud Curiosity Quills Press for a gorgeous design package here, from a beautiful cover to fitting interior illustrations that truly enhance each story.  “Stein and Candle Vol II Cold Wars” is a fantastic, thoroughly enjoyable book we cannot recommend strongly enough.  If you like New Pulp Fiction, Stein and Candle are you kind of heroes.  Move over Dillon and the Rook, you’ve got company.
Share