THE BIKER IS HERE! 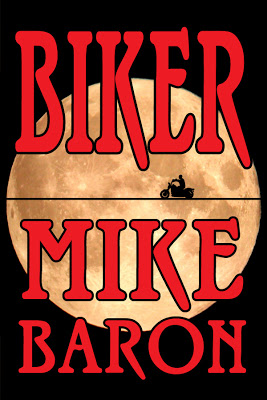 Airship 27 Productions is delighted to announce the release of a brand new crime thriller by one of the finest talents in genre fiction today; Mike Baron!
From the award winning creator of Nexus and Badger, comes a tale of terror and suspense set against the backdrop of the Outlaw Biker culture.  Josh Pratt is an ex-con turned private investigator.  A woman dying of cancer hires him to find the son she gave up as a baby.  The child’s father is a sadistic sociopath named Moon who has vowed to kill her for abandoning them.
Josh is the BIKER, caught up in a race for survival against a human monster on the road between heaven and hell at the end of which lies either salvation or damnation.  Baron spins a tale of unrelenting suspense and horror that moves across his narrative landscape like the roar of a chopper’s engine.  Creating memorable characters and authentic backgrounds, this is an amazing, quality crime thriller unlike anything you’ve ever read before.  The man who shook up the comic industry with his revolutionary stories now turns his limitless imagination to the world of crime fiction and the result will blow you away.
“Mike Baron tells a story like nobody else in the business,” says Airship 27 Productions Managing Editor, Ron Fortier.  “For years he’s captivated comic fans with his innovative tales of the erratic kung-fu Badger and the star-spanning, philosophical avenger, Nexus.  Now he’s entered the world of crime and horror fiction to rousing applause from fans everywhere.  We at Airship 27 Productions are very excited about bringing readers his latest novel; a riveting, no-holds-barred winner.  BIKER simply rocks!”
Featuring illustrations by artist Joseph Arnold and designed by award-winning Art Director, Rob Davis, BIKER is a punch-to-the-gut reading experience even the most jaded thriller fan will be cheering.
“Hard-boiled. Hard-edged. Hard-core. Hard to put down until you get to the last page.”
Charles Saunders, author of Imaro and Damballa.
AIRSHIP 27 PRODUCTIONS – Pulp Fiction For a New Generation!
Now on sale (https://www.createspace.com/4204985)
On Kindle within 2 days.
At our Airship 27 website as a PDF download for $3.
(http://robmdavis.com/Airship27Hangar/index.airshipHangar.html)
Within a week at Amazon and (www.IndyPlanet.com)
Share