Over the past year, Peter Parker has been saving New York City from evil villains as the masked hero, Spider-Man while balancing his heroics with homework and friends. When S.H.I.E.L.D. Director, Nick Fury, offers Peter the chance to raise his game to the next level…to become The Ultimate Spider-Man, Midtown High becomes a secret operations base for young heroes under the watchful eye of Fury and the school’s new principal, Agent Coulson. Spidey takes on S.H.I.E.L.D. missions across the Marvel Universe, encounters new villains, and battles his biggest threat yet…teen high school drama, in this funny and action– packed new series! 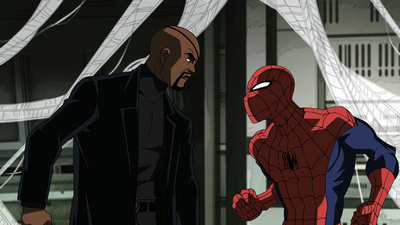 Disc One: Great Power, Great Responsibility, Doomed, Freaky, For Your Eye Only, I Am Spider-Man