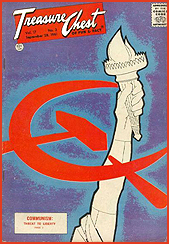 Okay, who’s to blame? Somebody has to be responsible – stands to reason. I mean, it’s always somebody’s fault. We’re not that somebody, you and me, so it has to be one of them! The hippies. The nonconformists. The others. Them!

Take this nonsense about global warming or climate change or whatever they’re calling it this week. What a load! So the ice caps are melting. Even if that’s true, and as far as I’m concerned the jury’s still out, but even if it is true… So what? You telling me we can’t handle a little more water? What are we, sissies afraid to get our socks wet?

There’s a newspaper in London – I forget which one – that said that global warming stopped years ago. Sounds right to me.

But you know what I think? I think that under those ice caps there’s some kind of big furnace, maybe atomic powered, that’s causing the ice to melt. Who put it there? Maybe the commies. I personally believe that the International Communist Conspiracy is not out of business, not by a long shot. It’s just biding its time, waiting for the right opportunity.

But as much as I hate the commies, I don’t think they’re melting the ice. Ask yourself this – who stands to profit? Obvious, when you think about it. The liberals, or progressives, or whatever they’re calling themselves this week. Simple logic. They convince us that the climate’s changing and they say that’s bad and that gas and oil and factories and cars are responsible. Then, wham-o! They lead us to their buddies, the mooches and takers, the nonproducers, who try to sell us on the idea that we have to replace our fuel sources with sunshine and wind! Bottom line, they turn a nice profit while we work on our tans.

I’m telling you, something has to be done.

And that reminds me. Comic books! How long are we going to let this filth pollute the minds of our young? It’s been going on for…what? Ever since the end of World War II, maybe earlier. A real doctor – not one of your liberal pseudo-doctors, but a doctor with a medical degree and everything name of Doctor Fredrick Wertham wrote a book proving – I’ll say that again, proving! – that these comic books cause juvenile delinquency and sexual perversion – you know what I mean – and crime in the streets and disrespect for authority and who knows what else! Got so bad, a United States senator name of Estes Kefauver held hearings on the matter. Oh, he knocked the wind out of their sails, Senator Kefauver did, and a lot of these comic book publishers went out of business. But not all. Just the other day, I saw somebody on the bus reading a comic book. So we still got a big part of the job to do. We shouldn’t rest until nobody even remembers these comic books!

Wayne LaPierre, of the National Rifle Association, blames gun violence on the media and the mental health care system. Sound right to you?

FRIDAY: Martha Thomases Looks At Comics Creators Looking At Themselves