Emily S. Whitten: The Hobbit – There Again, But Not Back Just Yet… 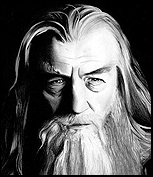 I’m sure it will shock no one to learn that I went to see the midnight showing of The Hobbit: An Unexpected Journey last Thursday. And despite being a tad bit (okay a lot bit) tired at work the next day, it was great fun. I don’t do that many midnight showings (seeing as how many of them land on weekdays) but when I do, I definitely experience that extra little thrill of being amongst the first to see something new, and of sitting in a movie theater with a bunch of friends in the wee small hours when by all rights, we should all be in bed.

Along with the general excitement of it all, I’ve been looking forward to seeing The Hobbit movie for seemingly forever now, ever since it was first announced (and even after they announced that it would now be three movies (!!)). I first read the novel in fourth grade English, where it was one of our assigned reading books. Looking back, I’m pretty impressed that our teacher managed to inject it into the curriculum. At the time, I vaguely recall having the feeling, in that childhood my-spider-sense-is-tingling way of feeling adult tension in the air, that this was some sort of tiny act of rebellion on her part against the mostly very sensible curriculum of books we were reading (many of which were also great, although whoever decided to include Dear Mr. Henshaw will not be getting my thanks anytime soon. Yawn). But my English teacher, bless her, decided that reading a fantasy adventure story, and a probably challenging one for that age group, was an important part of our childhood development; and so it was.

Many moons later, the story – in which the hobbit Bilbo Baggins joins the wizard Gandalf and thirteen dwarves in a quest to reclaim the dwarves’ homeland – is just as fun and full of adventure as it was then; but how does it translate to the big screen? Lucky for us, Peter Jackson has endeavored to find out. Jackson is, if you’ve been hiding under a rock somewhere, the mastermind behind The Lord of the Rings movie trilogy, one of the most amazing and epic motion picture trilogies of all time (as well as the highest grossing worldwide). That trilogy, especially in the extended edition, is both a spectacular adaptation of Tolkien’s story, and a moving and cohesive collection in its own right. It’s also a serious and dark story, and despite the warmth and occasional humor of the character interactions, pretty intense from start to finish. The Hobbit is a slightly different kettle of fish.

Tolkien wrote The Hobbit first, and as more of a children’s story; whereas by the time he penned The Lord of the Rings, he had developed both his world and his style into something more epic and cohesive than his original idea (and, in fact, as he wrote LoTR he went back and added bits to The Hobbit that tied the two together more closely). The story does get darker as it progresses (about when the dwarves arrive in Laketown), but overall, it is still lighter, and smaller in scope, than the trilogy.

(Warning: Possible Movie Spoilers Ahead, although it’s not like most of you don’t know the story already.)

The movie follows the book in that sense. While there is plenty of action and danger, I found myself smiling or laughing a surprising number of times throughout the first act of The Hobbit (i.e. An Unexpected Journey, which is all we shall see of the story until December of next year, when part two of three comes out). In part, that’s thanks to Martin Freeman, who has wonderful comic timing and does an excellent job as the younger Bilbo, who is by times amusingly befuddled or subtly, wryly humorous. There is also a fair bit of humor in some of the dwarf characters and in Ian McKellen’s Gandalf, who is a slightly more whimsical and mischievous wizard than the one we see in Lord of the Rings.

Some of the humor, however, comes from very enjoyable scenes that would not fit snugly in Lord of the Rings but seem perfectly at home here – scenes such as the dwarves “cleaning up” after their party at Bilbo’s house, haphazardly flinging and bouncing Bilbo’s mother’s best china hither and yon throughout the hobbit-hole while Bilbo looks on in distracted despair before walking into the next room and discovering it’s all now neatly stacked away. This scene also gives viewers an important sense of the personality imbued by the dwarves of The Hobbit, which is pretty helpful considering it’s a bit hard to remember which dwarf is which: thirteen is a fair number of small bearded main characters to keep track of.

Another humorous scene I still remember as one of my favorites from my first childhood reading is the one in which Bilbo endeavors to trick a trio of mountain trolls out of eating the whole company; and a fair bit of time and humor is devoted to that scene in the movie, much to my delight. These scenes work wonderfully within the whole. And yet, as my friends and I left the theater, a few of them complained that in places the movie is a bit hokey… and I didn’t disagree. From the best fun scenes, through the more obvious gags that are still funny (such as Bilbo insisting the whole company must go all the way back to Bag End because he forgot his handkerchief, and then one of the dwarves helpfully flinging him a dirty old piece of cloth to use instead), the movie does arrive at a few scenes that are wince-worthy.

The most notable of these is the one with Goblin King. He is fascinatingly grotesque in appearance, and his appearance comes at a dire time for the dwarves, who have been captured and are being held deep underground by what seems like thousands of goblins. The Goblin King is threatening to (and then does) alert the Dwarf King Thorin’s mightiest living enemy, the orc leader Azog, who is on the hunt for Thorin, that the goblins now have him. Logically, it should be a serious moment in the movie. And yet the Goblin King’s demeanor is comical (and not in a good way) and his threats, issued with laughter, are anticlimactically not very menacing at all. (Threats issued with laughter can be super menacing. A good evil laugh can actually make threats more menacing. In the case of the Goblin King, this…is not the case.) Even the bit where he tells another goblin to send word to Azog is off-kilter, with the secretary goblin being a weirdly stunted specimen who apparently gets around the goblin caverns on a zip-line.

This scene and a very few others in the movie are jarring; however, as a whole, the movie is thoroughly enjoyable. Despite the weirdness of the Goblin King, almost without exception the rest of the characters (and actors) are wonderful; and the visuals are just as stunning as those in The Lord of the Rings trilogy. And there are some fantastic scenes as well. These include the delightful opening of the movie, which ties The Hobbit to The Lord of the Rings by having the elderly Bilbo, in the midst of preparations for his 111th birthday party, writing the narrative and chatting with Frodo (hooray, Elijah Wood cameo!). They also include the scene in which Bilbo and Gollum are having a contest of riddles, all alone in the darkest tunnels of the goblin realm, which was one of the darkest and most ominous scenes, and wouldn’t have been out of place with the tone of The Lord of the Rings.

Overall, despite the dwarves’ very serious quest, this movie feels less serious of purpose than The Lord of the Rings; but that is something I attribute to the original book, rather than the movie’s production. Just as Jackson tried to be faithful to the tone and sense of the trilogy, here he has been faithful to the source material, and I think remembering that as you go in to see the movie (or in thinking of it afterwards) contributes to the enjoyment of it. Going in with the expectation of seeing another Lord of the Rings might leave you feeling surprised, as I was, at the differing tone of this movie; but going in with the mindset that this is an adventure, a romp, and a fun journey will leave you feeling satisfied with the end result. And, of course, it’s important to remember that this is only part one. I suspect that through the second movie and by the end of part three, the tone will shift, as the book’s did, until it arrives in the territory of Lord of the Rings and leaves us with a fairly consistent six movie collection. I personally can’t wait to see what comes next.