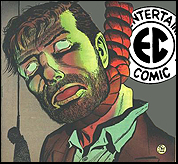 Over at The Comics Journal website Michael Dean posted an article about how the Harvey Kurtzman Estate (represented by Denis Kitchen) and Al Feldstein filed to “regain” the copyrights to their EC Comics work.

Feldstein and the Bill Gaines estate reached an agreement – undisclosed, of course – but the Kurtzman situation is more complex. Kurtzman created Mad, he wrote it, he did the layouts for his artists and he drew a modicum of the material as well. But it’s Mad and Mad is owned by Time Warner. It’s a teevee show on one of Time Warner’s cablenets. The magazine might not be very profitable any longer, but the brand name most certainly is.

Be that as it may, I put the word “regain” in quotation marks because, well, Al and Harvey never had those copyrights in the first place. EC Publications and its sundry successors in interest always held them. And, as Dean and others point out, the exploitation value of the material has been well-plundered. But we’re saddled with a remarkably antiquated, unfair and pro-theft copyright law and I think Al and Denis deserve to get in the game.

But who really should own what? This is the sort of thing that gives compassionate thinkers migraines and earns lawyers their reputations. Lots of people contributed massively to the creation of this body of material, including a great many of the most accomplished writers and artists of the time. And, in my opinion, of any time.

Wally Wood, Jack Davis, Bernie Krigstein, Willie Elder, Al Williamson, John Severin – to name simply the first half-dozen creators to come to mind. They and their co-workers played as important a function in the creation of the EC legacy as Al and Harvey. Their work was not interchangeable. The then-current artist list of, say, Charlton or even St. John Comics could not have been dropped into their place – well, they could, but you wouldn’t have had EC Comics and I wouldn’t be writing this piece.

Then again, Bill Gaines took the financial risk. He selected and hired these people. He contributed to a great many of the stories, particularly those edited by Al Feldstein. Does he (or his estate) deserve to be chilled from the long-term rewards?

Maybe. Bill didn’t return any of the original art – but, then again, in those days nobody did. However, Bill kept and archived the original art, and decades later he had it auctioned off. When he did this, artists were getting their work back and those that had it returned whatever inventories of old art they had on hand. Bill did not do this. He gave the artist a taste of the revenue, at a price determined by him and him alone. The artists were unable to get their art back, to do with what they wish.

“Ethics” are tricky. The idea is to rectify wrongs without wronging others in the process. This is only somewhat easier than building a perpetual motion machine.

The conversation over at The Comics Journal is spirited, engaging and, in a few instances, amusingly over-the-top. These are three important elements in protracted online conversations. You might want to check it out.