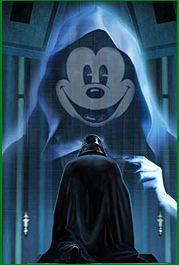 When I was deciding on a topic for this week’s column, I tried hard to think about what in the comics world I wanted to tackle next – but instead, my brain just kept going, “Whoop Whoop Whoop Disney Disney Disney Alert Alert Alert You’re About To Go To Disney Wheeeeeeeeee.”

Yes, my brain really does do that. Especially when I’m about to go jaunt around Disney World (and Islands of Adventure and Harry Potter World, eeeee!) for four days straight. Between the excitement of being about to finally try real butterbeer, the knowledge that we’re arriving at Disney and Epcot smack in the middle of the Epcot Food & Wine Festival, and the fact that Universal Islands of Adventure now has four Marvel rides, including a re-vamped Spider-Man ride, I can barely string sentences together at all. Considering the last time I rode the Spider-Man ride at Islands of Adventure it turned me into Little Plucky from Tiny Toons (“I wanna do it again, I wanna do it agaaaaain!!!”), I expect incoherent excitement will also be my constant state once I get there.

But since I don’t think I could convince Editor-in-Chief Mike that jumping up and down in place while clapping is a valid substitute for a written column, I’ll try to contain myself long enough to be vaguely articulate and stuff over here. That doesn’t mean I can’t keep thinking about my upcoming trip, though. In fact, given Marvel and Disney’s close association these days (despite the fact that Universal continues to hold onto the licenses for their Marvel rides thus far), my trip is totally Relevant to Our ComicMix Interests, and I can’t help but wonder when we will start to see Marvel rides appearing at Disney World. Thinking of this mash-up of worlds has inspired me to new heights of column-writing silliness. Therefore, I give you:

[Wherein we re-imagine the origin of a Marvel villain featured in an Islands of Adventure ride, with the assumption that he was born into, not the Marvel universe, but the Magic Kingdom. Surely this means his story will be full of cheerfulness and light, right?]

Born into a family of Parisian gypsies, one of whom hangs around with a hunchback all the time, young Victor and his father (no mention is made of his mother, because this is Disney, and mysteriously missing a parent at a young age is common) lose track of their caravan and roam the countryside together trying to find it until, through a tragic misunderstanding, hunters searching for food accidentally shoot his father, thinking he is a deer (oh no!). Upon losing his father, Victor wanders far and wide, but comes to rest in a small country town where he makes friends with a group of stray Dalmatian puppies who bring him bits of food in exchange for him patching up their hurt paws and ears.

Unfortunately, the Dalmatians all run away after a tall lady with crazy eyes and an extreme fondness for black and white clothes wanders into their alley hideaway making grasp-y motions, leaving the adolescent animal doctor on his own to wander again. He is very sad, because he likes puppies, and now he has none. But as luck would have it, upon reaching the sea nearby, Victor encounters a kindly-seeming purple-skinned sorceress who recognizes that he is gifted with extraordinary magical abilities. Offering to take him under her tentacle and teach him the ways of magic for the low price of just a couple of toes, she and Victor have many wacky adventures (like when he tries to use her magic hat and broom to help him with the chores and the water just gets everywhere).

But just when all seems well again in the young man’s life, he discovers that his mentor was actually responsible for his father’s death – she had sent the hunters out to bring her fresh meat because she was really-super-tired of eating fish! Oh no! Enraged to learn she was responsible for his earlier loss, Victor loses control of his magic and sets a nearby oil slick on fire (thus teaching us a valuable environmental lesson about how bad it is to have oil slicks lying around just everywhere in the ocean) which sadly scorches his face. In a fit of teenage rebellion he puts on a soothing metal mask his teacher has just lying around (because who doesn’t have one of those?) and storms out of his apprenticeship, taking the ol’ sea witch’s favorite big black pot with him too, just for spite.

Now alone once more and getting thirsty, Victor tries to magic up some tea in his new crochan – but instead of tea filling the pot, a voiceless version of himself climbs out! Deciding this is better than tea, he makes enough Voiceless Victors to play a good game of football with him. Disastrously, one of the VVs kicks the ball into a farmyard, where it whacks a big white pig in the head, which makes the pig-keeper angry. The pig-keeper, whose name is Reed, vows to get even, and chases Victor all over the countryside trying to beat up his football team and break his pot. At which point Victor, parentless, mentor-less, pet-less, slightly toe-less, vaguely face-less, and still really, really thirsty, decides that he’s just about had it with this nonsense, and says the hell with it; he’s going to create an army of Voiceless Victors and take over the worrrrllldddd. And thus, a new evil villain is born.

…But he still likes puppies.

This column has been brought to you by the letters M and D, and way, way too many endorphins. Please forgive it for being kind of ridiculous.