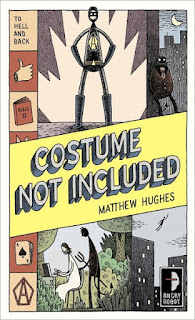 It’s not easy being a superhero in the best of circumstances, so pity the poor man whose powers derive from a demon — and whose mother is dating one of the nation’s leading evangelical preachers. And when that young unfortunate’s name is Chesney Arnstruther, well…that’s someone whom you would not want to switch places with.

Chesney is the superhero of Costume Not Included

, second novel in a trilogy called “To Hell and Back” — though it means that more puckishly than most fantasy books would — and I’ll direct you to my review of the first novel, The Damned Busters, for the precise details of how and why Chesney made that deal with the devil, how he did it without forfeiting his immortal soul, and why an actuary wanted to be a musclebound superhero in the first place.

There are two kinds of trilogy-middles: the ones that lose the energy of the first volume and mark time until the finale, and the ones that are happy to have gotten the scene-setting out of the way and leap into creating ever more complications to keep things interesting. Costume, luckily, is of the second type: the first book took a little while to get going, but this one hits its wry tone right up front and charges forward at exactly the right pace.

Really, how could you put down a novel that begins like this:

“I thought you weren’t speaking to me,” Chesney Arnstruther said into the phone.

“I’m not speaking to you,” said his mother. “I’m telling you something for your own good, is what I’m doing.”

I’ve spent the last several years haranguing anyone who wanders into Antick Musings about how essentially funny and entertaining a writer Matthew Hughes is — see my other reviews of Hughes books, all of which you should buy, read, and love, in approximately that order: The Other, Hespira, Template, The Spiral Labyrinth, and Majestrum — so I’ll leave that part as read: Hughes came into the SFF field writing Vance-inspired far-future books, but his influences were always deeper than Vance (not that being able to write as smoothly and sardonically as the great Jack Vance isn’t a monumental achievement to begin with), and he’s since shown that his essential qualities shine through in a variety of subgenres.

So, anyway: Chesney is a superhero, and he’s been doing well at it. Too well, actually: he’s wiped out pretty much all of the Golden Age-style street crime (guys in suits and fedoras robbing banks, muggings, and so forth) in his city, and his deal only extends so far. He can’t directly stop the sources of crime — which, in best superhero fashion, lies with a shadowy cabal that secretly runs that city — and his put-everything-into-the-right-boxes mind is not happy leaving a job undone. (His new girlfriend, Melda, is also pushing him in slightly different directions; she’s like to see him have a higher media profile and perhaps make some money from being the Actionary.)

Adding to the complications is that his mother’s new boyfriend — that noted thriller writer turned TV evangelist, Reverend Hardacre — has his own new, and very odd, theory about the secret cosmology of the world, and it’s becoming more and more clear that Hardacre is right. And the Devil is not entirely happy with the deal with Chesney — that lack of a soul coming his way vexes him, and the Devil’s whole raison d’etre is to trick and twist and sneak — and the Devil has deal with other folks who may help him cause trouble for Chesney.

So complications — very idiosyncratic, unique complications, of the kind only Hughes could create — proliferate, until Cheney finds himself chased closely by a smart police detective, meeting a Jesus Christ, (not the Jesus — not the current one, at least — but a prior, historical version) and having himself proclaimed as a new prophet by Hardacre. But Chesney still has Melda, and his demon Xaphan, on his side, plus his own inextinguishable drive for truth and justice. And there’s still one book to come in this trilogy.

Not to sound like a broken record, but Matt Hughes is a great, wonderfully entertaining writer — his dialogue pops, his people are quirky and real, and his situations could be written by no one else in the world. If you don’t like his work, there’s got to be something wrong with you.