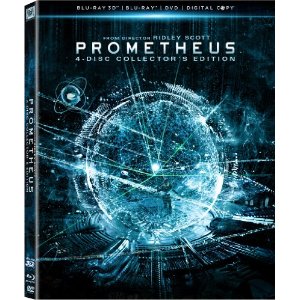 Ridley Scott rarely repeats himself, avoiding formulaic sequels, useless prequels, and remakes. Instead, the stylist conjures up new works and attempts to be thought-provoking time after time. You might have bought into the hype that this year’s Prometheus is an out and out set up to his Alien, but you’d be wrong. While tangentially connected to the first successful science fiction/horror film hybrid, this film is a pure science fiction film owing plenty to Stanley Kubrick.

The movie, now out on disc from 20th Century Home Entertainment, is an ambitious production with a strong cast, surrounded by amazing visuals. While we laughed at how weak the story and characterizations were in James Cameron’s Avatar, here, we are merely disappointed the story isn’t a match for the visual virtuosity on display. While far from Scott’s best, he deserves credit for trying something different and challenging his audience.

Scott sets his story in 2093, optimistically thinking we will be regularly working in space and ready to traverse the distant reaches of the galaxy. Scientists Elizabeth Shaw (Noomi Rapace) and Charlie Holloway (Logan Marshall-Green) find a map as part of a 30,000-year-old cave painting on the Isle of Skye, confirming there is sentient life elsewhere in the universe. Dubbed The Engineers, they seemingly beckon mankind to find them. The audience has already met them in an opening sequence that suggests they arrived on Earth with some goo that ignited the spark of life (and was also seen as the mummified Space Jockey way back in 1979). To discover the answer, deep-pocketed Peter Weyland (Guy Pierce) funds the construction of The Prometheus, which is thusly launched, its crew in hibernation en route to moon LV-223 and the evidence of intelligent life.

Heading up the crew is Mereditch Vickers (Charlize Theron) alongside the ship’s captain Janek (Idris Elba) with android David (Michael Fassbender), geologist Fifield (Sean Harris), and biologist Millburn (Rafe Spall). One trick he does reuse from Alien is that before long, things go horribly awry. The story has gaping, starship-sized plot holes and the grand themes – where do we come from? — do nothing to mask them. It would have been nice if the crew had more depth of character or interacted in more interesting ways.

Fassbender has the toughest job, making his eight generation android different than the others seen in earlier films making up the Alien universe. Theron is strong with her work but Rapace gives us the more interesting, nuanced performance.

Scott shot this for big screen 3-D, framing things to pop just so, and dazzle us with detail. Thankfully, that all transfers pretty nicely to the home screen and 2-D. The transfer is pretty spectacular both audio and visual.

The Combo Pack offers you the film on Blu-ray, DVD, and Ultraviolet (a larger Combo Pack with 3-D Blu-ray is also an option, with a fourth disc containing an amazing three-and-half-hour documentary by Charles de Lauzirika). The special features provided on the standard Blu-ray begins with Scott’s audio commentary, supplemented with one from co-writers John Spaihts and Damon Lindelof.

There are thirty-seven minutes of Deleted, Extended & Alternate Scenes which you can on their own or with audio commentary by editor Pietro Scalia and VFX supervisor Richard Stammers. These are all interesting to watch, several of which would have made the film stronger. The Peter Weyland Files (18:57) are culled from the Internet.